Lenovo P70 is one of the smartphones have a terrible long battery life with the most elegant design. Now Lenovo P70 also available in India, the phone is listed on Lenovo India website. The Lenovo P70 price Rs. 15,999, the Lenovo wants their products aimed for mid-range users. 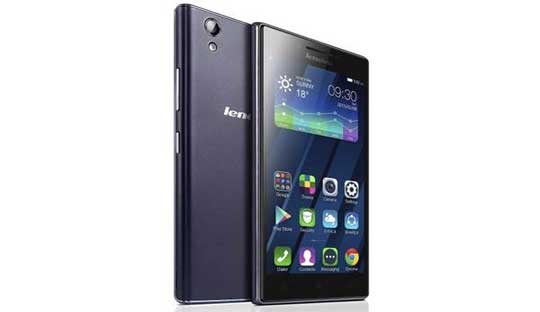 The Lenovo P70 design quite boxy with sharp lines and angles, full of masculine design. It has a shiny frame made from plastic, while the touch screen size of 5 inches covered most front part of the phone. Below the screen are three navigation keys, while the camera, speakerphone and the sensors and the company logo is placed above.

The Lenovo P70 is equipped with a large battery capacity and also in his possession a powerful configuration. Specifically, a 1.7GHz Octa-core processor, MediaTek MT6752 64-bit platform, Mali-T760 GPU graphics, along with 2GB RAM, 16GB of internal memory, and also expandable via MicroSD card up to 32GB. With this configuration, Lenovo P70 brings impressive performance and can be processed quickly, smoothly for all tasks. 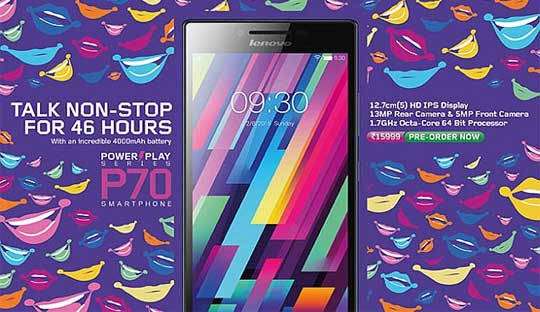 Most especially on Lenovo P70 which we must mention is the 4000mAh battery. This is a high-capacity battery, and as Lenovo announced it possible for us to constantly talk time up to 18 hours, the amount of on-screen average of up to 15 hours, while standby time up to 696 hours on 3G network. This means that we can use the next 2 or 3 days without charging.

Another interesting feature of the Lenovo P70 is whether the price is very affordable, but the phone is not only powerful, but have a fantastic duo camera with very impressive picture quality. It has a 13-megapixel rear camera with autofocus and LED light, while a 5-megapixel front camera can bring realistic images with natural colors.

In addition, the Lenovo P70 is a Dual SIM smartphone comes with pre-installed Android 4.4 KitKat operating system and Lenovo interface. The icons on colorful background, or custom installation, adjustment tasks, or multitasking interface can be used easily. It has a removable plastic back cover, but the battery is not removable.

He started this blog as a hobby to show his affection for gadgets, but over the time this hobby became professional. And now he is working as a full-time blogger, but in free time he loves watching movies and games. PayPal donation for TechToyReviews will be appreciated.
@https://twitter.com/Techtoynews
Previous iOS 8.3 comes with many new improvements, new Emoji and fixed many bugs
Next Dell Venue 10 7000 with 10.5 inch AMOLED Display, Android 5.0.2 OS Launched