Google is looking to bring its Android app on PC and laptop devices that uses Chrome browser.

This extension is still in the testing process should have a lot of apps does not work really well and we can only run one application at a time only, it was created for the purpose of helping the programmer User is testing their application is performing well or not in Chrome. During the tests, ARC Welder do not support Google Play Services, many applications require this service will not operate, including the application by Google. If Google successfully run Android apps on Chrome is definitely the very useful of this browser and Chrome OS will increase their popularity. 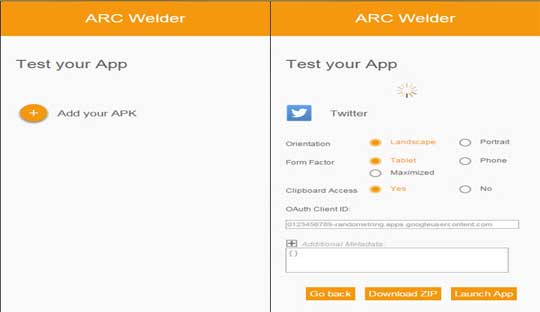 More detailed information is expected to be unveiled at the end of the May 2015. In order to test a particular application, you just download ARC Welder from Chrome store, then download the APK file application and click on the Open button. Remember, its only run one application at a time, to be removed to run second application.

However, at the present time, the ARC Welder still works with Android 4.4 version, while not support Lollipop 5.0. Google also said that the ability to develop a larger version of Google Play app store for the Chrome browser. With Microsoft prepares to launch Windows 10 operating system for both mobile and computer. Google will need to do more to help maintain the current Android status, expanding market share to devices such as desktop and laptop.

He started this blog as a hobby to show his affection for gadgets, but over the time this hobby became professional. And now he is working as a full-time blogger, but in free time he loves watching movies and games. PayPal donation for TechToyReviews will be appreciated.
@https://twitter.com/Techtoynews
Previous LG Display: 5.5 inch Quad HD Display with high sensitivity will be used in LG G4
Next Office Lens application from Microsoft to transfer images into text for Android and iOS