Samsung Galaxy Alpha is the new smart phone is launched by Korean electronics. This is the first galaxy phone which is equipped with shiny metal.

Galaxy Alpha is a masterpiece with metal frame and luxury design with sharp display, its now available in India all shops and online outlets in Rs. 39,990 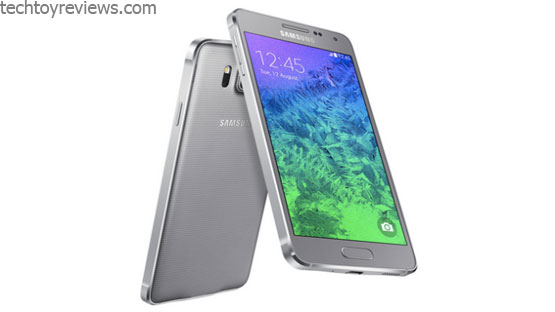 We can see, Samsung has opened a new direction in the design of the smartphone, the metal design is not only create luxury look but also more durable equipment than the previous one.

With a full metal body Galaxy Alpha looked perfect. Although the panel as well as home button on the phone still resembled its previous Galaxy S5. All four edges slightly rounded that give more grip and comfortable to handle.

Samsung alpha is also available in black, white, yellow, silver and blue. The front panel has a secondary camera, speakerphone and 2 sensors are located above the display. Below the screen is the home button. The rear part of the phone is designed exactly like the Samsung Galaxy S5. The back part also comes with the rear camera with flash and heart rate monitor sensor.

Galaxy Alpha is 6.7mm thin, so you can comfortably handle it without any tension. It’s very lighter than the previous Galaxy S5, It’s weighs only 115g. It’s considered easy to use with one hand than its previous one. Unlike S5, Samsung alpha seems to have no  water resistance, so you should be careful to avoid falling into the water.

The new interface is very nice, stable handling performance. Latest Samsung galaxy phone runs the latest version of the Android platform, which is Android version 4.4.4 KitKat. Hopefully the new products will be equipped with all the  advanced features similar to the Galaxy S5.

Samsung galaxy support all the features as well as today’s leading applications. Alpha is equipped with a fingerprint recognition feature similar to the previous version. This technology is located below on the Home button. Besides, this new phone is also having sensors that measure heart rate and health monitoring called S-Health, these are located next to the rear camera.

Galaxy Alpha has battery of 1860 mAh capacity, this is a relatively low level of capacity, but it has integrated super battery saving technology. So this battery can still satisfy the user for a long time.

Galaxy Alpha with dual sensor camera, the rear camera with 12MP resolution Flash support. The resolution of the camera is much lower than the 16MP camera of Galaxy S5.

However, the phone still supports HDR mode and video recording support 4K with 3840x2160pixel. In addition, the phone also has a front camera of 2.1 MP support video calling and photography.

Galaxy Alpha with powerful graphics processor. Display resolution of this device does not impress, the phone is also not water resistant. However, the phone really stand out with a metal frame with luxury design is expected to be priced lower than its previous Galaxy S5.

He started this blog as a hobby to show his affection for gadgets, but over the time this hobby became professional. And now he is working as a full-time blogger, but in free time he loves watching movies and games. PayPal donation for TechToyReviews will be appreciated.
@https://twitter.com/Techtoynews
Previous Nokia 130 Dual Sim Phone just Rs.1750
Next Samsung launched world’s largest curve UHD TV at IFA 2014