Facebook launches new Messenger Platform, a platform for third-party applications can be integrated into the chat Messenger and send the contents easier. 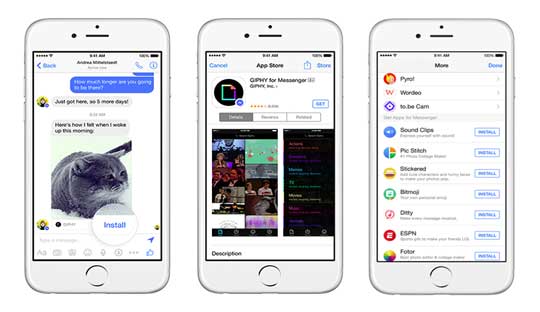 For example, when you install the app called “GIPHY for Messenger”, you can quickly send a GIF image to friends. The receiver also has a “Reply” button to switch from Messenger to GIPHY, find a suitable picture to answer and return Messenger without having to exit the app. In addition to the GIF image, you can send videos, funny pictures, audio clips, a sports summary, and more. Some app even has a direct presence in the Facebook Messenger app via a “card” when you chat with new people.

The aforementioned third-party app that can be directly installed from the Messenger, but in fact they are still in the Apple App Store, there are things that you do not have to switch between Messenger and App Store during the installation process. If the recipient content similar app is not installed to the one who sent “Install” button will appear to allow them to do that. There are 40 applications were compatible with Messenger Platform such as Action Movie FX, ESPN, the Weather Channel, JibJab, Ditty and in the future there will be many more apps appear.

On this occasion, Facebook also launched additional features Business on Messenger to help businesses communicate with customers more convenient. One example is Facebook launched as follows: during your payment at a merchant site, you can start a conversation by Messenger and receive information such as stock purchase confirmation, see a situation where goods were delivered. In addition, users can ask any questions and customer care staff of enterprises will reply soon. 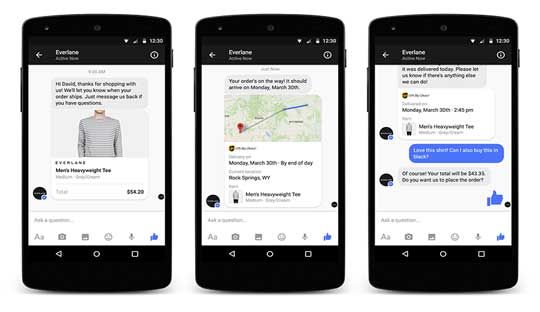 Currently Facebook has partnered with two fashion retail chain to deploy Everlane and zulily Businesses on Messenger. Also, they partnered with the Zendesk company to support directly chat with customers. These changes will appear in the next few weeks.

He started this blog as a hobby to show his affection for gadgets, but over the time this hobby became professional. And now he is working as a full-time blogger, but in free time he loves watching movies and games. PayPal donation for TechToyReviews will be appreciated.
@https://twitter.com/Techtoynews
Previous Novo Camera: Compact video camera
Next Nokia N1 will be sold widely around the world