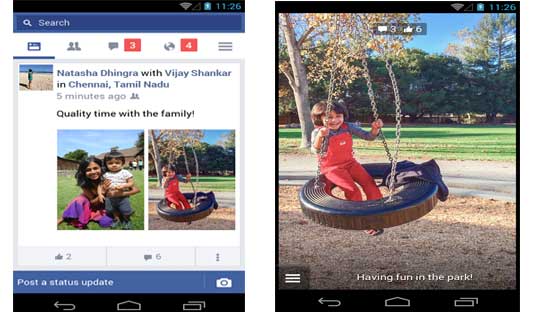 Facebook Lite Version has very low memory, only 262 KB, require devices running Android 2.2 or above and as Google Play described that it will load news feed very fast even if you use the 2G network. Currently the Facebook Mobile application is only available in the country like Bangladesh, Nepal, Nigeria, South Africa, Sudan, Sri Lanka, Vietnam and Zimbabwe.

The number of smartphones is growing in India and the Asia – Pacific region, especially low-end smartphones. Facebook Lite is therefore reasonable direction of CEO Mark Zuckerberg.

Unlike other separate applications, Facebook support full functionality and the interface is a compact and user-oriented. It is also regarded as a shortened version of the Facebook application is available.

So still in the testing phase Facebook Lite should be introduced very quietly, unknown applications can be provided at a global scale or not. If in the case of users who do not meet expectations or a reason, so can this social network will abandon the project. In addition the project called Internet.org Facebook now offers free internet in some African countries.

He started this blog as a hobby to show his affection for gadgets, but over the time this hobby became professional. And now he is working as a full-time blogger, but in free time he loves watching movies and games. PayPal donation for TechToyReviews will be appreciated.
@https://twitter.com/Techtoynews
Previous Asus Fonepad 7 and Asus Fonepad 8: Best 3G Tablet for Mid-range Segment
Next Lumia 532 and Lumia 435 Specification Comparison