Blackberry Classic with new features and a combination of modern and classic design launched yesterday in the New York, with a listing price of $ 449. 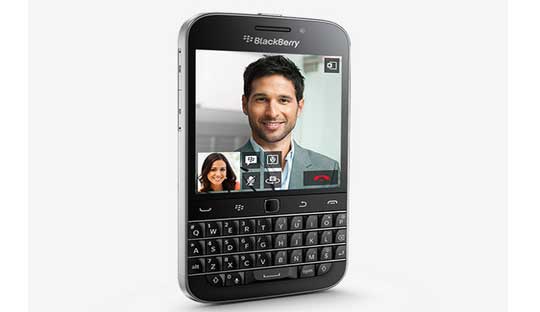 Finally, the Latest Blackberry Phones 2014 was released after many leaks. BlackBerry Classic is expected to be combined with the Passport debut earlier, continue to bring the integrated signal pole for Canadian manufacturers, especially in the holiday shopping season this year.

Although almost completely exposed previously, but the official announcement from the Blackberry manufacturer definitely creates excitement who love Blackberry devices.

Specifically, BlackBerry Classic comes with square display of 3.5 inches with a resolution of 720×720 pixels, protected by tough Gorilla Glass glass 3. It also uses a 1.5GHz dual-core processor, Qualcomm Snapdragon MSM8960 chip, 2GB of RAM, 16GB internal memory can be expanded via memory card slot up to 128 GB, the power of this phone is rated par compared with the senior Blackberry Z10 debut last year. BlackBerry Classic also has a rear camera of 8 megapixels and front camera of 2 megapixels. The battery capacity of 2515mAh.

BlackBerry Classic brings monolithic design, also features a combination of traditional and modern design of the BlackBerry. The highlights of this phone is the key phrase functions as the running previous OS 7 next traditional QWERTY keyboard. Under the share of manufacturers, keyboard, hardware on the new product’s ability to prepare them for faster virtual keyboard, and the battery on Classic will have a better than the legendary BlackBerry Bold.

Bring the tradition in design, but BlackBerry Classic is ultra modern in terms of software and operating systems. The device has latest BlackBerry OS 10.3.1, meaning that the Assistant features such as BlackBerry, BlackBerry Blend was supported. In addition, advanced connectivity as 4G LTE, Wi-Fi, Bluetooth 4.0, NFC black Mulberry also equip their products.

BlackBerry Classic is already sold out present time, the phone is priced at US $ 449 this coming will be distributed through the network such as AT & T and Verizon.

He started this blog as a hobby to show his affection for gadgets, but over the time this hobby became professional. And now he is working as a full-time blogger, but in free time he loves watching movies and games. PayPal donation for TechToyReviews will be appreciated.
@https://twitter.com/Techtoynews
Previous BLU Studio 7.0: first 7 inch smartphone in the world
Next Oppo R5 Review: New definitions of the slim phone