Currently, a camera with wireless connectivity such as WiFi and NFC are becoming very popular among young users to easily connect and share with the other smart devices to become very useful.

On the market today there are so many best small WiFi cameras, but in this post we are talking about only three candidates, especially with an affordable price. 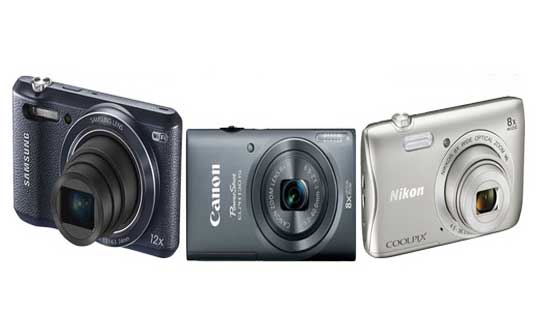 Today we will compare three compact cameras such as Samsung WB35F, Nikon Coolpix S3700 and Canon ELPH 130 are integrated with WiFi, but only two of them features NFC connectivity too.

Sensor: Sensor size of all three cameras is same. The Canon ELPH 130 and the Samsung WB35F with 16MP resolution, while the Nikon Coolpix S3700 comes with a 20MP resolution.

Aperture and Optical Zoom: The Samsung WB35F camera with 12X optical zoom, while the remaining two competitors with only 8X zoom.

Video recording: All three cameras are capable to record HD videos, while recording user can use the full zoom lens with full time AF functionality.

WiFi & NFC: Recently, most of camera companies have integrated wireless connectivity into their devices so users can easily connect to the various smart devices. All three cameras have integrated WiFi connection, while the Nikon S3700 and Samsung WB 35 Camera also supports NFC connectivity and can connect with their smart devices via separate app to share Data will be used as a remote or camera.

In addition to the above features, the brand names are also seems a decisive part in the selection of the camera. The price of three units also very close to each others and also in the range from $100 to $150.

He started this blog as a hobby to show his affection for gadgets, but over the time this hobby became professional. And now he is working as a full-time blogger, but in free time he loves watching movies and games. PayPal donation for TechToyReviews will be appreciated.
@https://twitter.com/Techtoynews
Previous GoPro launches Hero+ LCD with LCD screen, FullHD recording at 60fps, Price $299
Next Nintendo NX: Next Android gaming device from Nintendo?