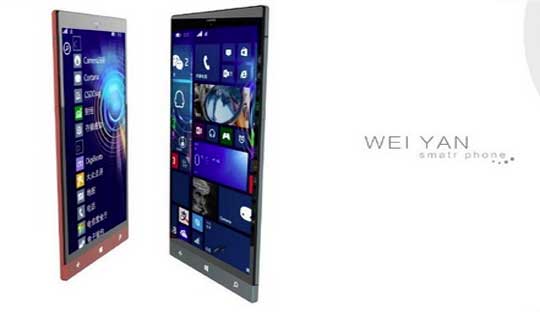 Today the mobile operating system is not uncommon, as each platform has its own strength and beauty, but users cannot spend more money and accept the use of multiple Smartphones at the same time. So that a device can run multiple platforms will probably become the trend in the future.

Recently, the Chinese media reported on a device called Wei Yan Sofia allowed to run Dual Boot Windows Phone or Android and you can choose a different platform to use at the same time.

The Wei Yan Sofia Dual Boot smartphone will own 5-inch FullHD Display with a resolution of 1080×1920 pixels. The name comes from Intel Sofia, called a cheap chips from Intel, is said to represent the company in competition with a low-cost chip from Qualcomm and MediaTek. In addition, the Wei Yan Sofia Dual OS smartphone will have an Intel processor, 2GB of RAM, 32GB of internal memory and rear camera of 13-megapixels, a front camera of 5-megapixels and targeting the users of mid-range segment.

This is not the first time any Smartphone company thinking of combining Dual Boot Android and Windows Phone. However, this is the first feature from a Chinese manufacturer and is likely to become a reality. A major challenge of this product is the Windows Phone operating system is not compatible with the Intel chip, and will have to wait for the changes to the Windows 10 operating system for smartphones.

Currently, Wei Yan Sofia price and release date has not been disclosed.

He started this blog as a hobby to show his affection for gadgets, but over the time this hobby became professional. And now he is working as a full-time blogger, but in free time he loves watching movies and games. PayPal donation for TechToyReviews will be appreciated.
@https://twitter.com/Techtoynews
Previous Pentax DSLR camera Specifications Leaked
Next Asus X553MA laptop Review: A perfect Mid-range Laptop