Microsoft Surface Pro 3 one of the most awaited technology from Microsoft in 2014. 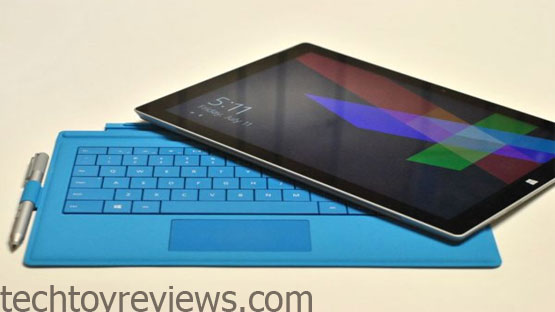 One of the most conspicuous features of the Surface Pro 3 is Surface Pro pen can work well in a variety of applications. Additionally, OneNote is a simple pre-installed application, for example of how it works. If you set the cloud services for OneNote files can be synchronized with other devices such as Android or iOS phones and Windows or Mac laptops. More amazing feature  is that you only need to click once on the top of the pen to open OneNote, fully automatic.

When deciding to buy a Surface Pro 3, many people are not happy when the most accessory are not included in the box. You have to buy all these products for surface store. The type cover is  extremely versatile, works as a tool to protect the screen, keyboard, and touchpad. Despite the fact that many customers can not accept the buy microsoft surface without accessory.

This new type cover version of Surface Pro 3, its  significantly larger than older one. The old version will still be usable, but  when folded it back, it will not cover the entire display. It must have the best keyboard for tablet you can buy, but still quite expensive compared to the other modern laptop. This is a great improvement to work easier.

Touchpad is equipped with the new type cover also slightly better than the previous version. Made from materials called “soft ceramic”, introduced by Microsoft. Touchpad brings back the good feeling. But despite these improvements, it still can not meet the high sensitivity and fast enough for multi-tasking operations. All these are making users very difficult to control the entire operations on the display. You will have to combine the versatility of the touchpad and touchscreen, plus a pen, to be able to use the ms surface pro 3 in a flexible manner.

Display and specifications of surface pro 3

Surface Pro 3 resolution is a 2160×1440 pixels with a size up to 12 inches. IPS panel delivers clear display, its look bright and great at all angles. In developing trend display with a great resolution and Full HD, Microsoft has done a good job with their Surface Pro 3. However, many customers still want to have a higher pixel density on the 12-inch screen devices.

Surface Pro 3 has USB 3.0 ports, a MicroSD card reader and Mini DisplayPort. It has a 5 megapixel camera with 1080p HD video recording, and stereo speakers with Dolby Audio sound technology. The hardware specs include 64GB  SD storage of up to 512GB; 4GB or 8GB of RAM and WI-Fi. Surface Pro 3 equipped with a five USB ports – three USB 3.0 ports and two USB 2.0 ports – and a Gigabit Ethernet jack.

According to the latest information from Microsoft, Surface Pro 3 is available in Core i5, 8GB RAM and SSD 256 GB. The ability to operate the device entirely comparable with some of today’s high-end laptops such as the MacBook Air, 13-inch Lenovo Yoga 2 Pro or even Microsoft Surface Pro 2 was launched last year. With this configuration, the surface pro 3 can run perfectly smoothly on Windows 8 tasks from Web surfing to Photoshop. One other  plus point is the high resolution helps to open multiple applications simultaneously on the screen becomes easier.

However, do not view this as a handheld gaming device, though the ability of the device to run the game much better than other tablets, but still should not be compared with similarly priced laptops. Surface Pro 3 Price Range is about 75,000 to 85,000 rupees in India at online web stores.

Surface Pro 3 with the average battery life. In the battery test while watching video, it runs continuously for 7 hours and 28 minutes, the user can ensure almost a full working day. Yoga 2 and HP are little slightly better. However, with the same test, the MacBook Air could run more than 6 hours.

He started this blog as a hobby to show his affection for gadgets, but over the time this hobby became professional. And now he is working as a full-time blogger, but in free time he loves watching movies and games. PayPal donation for TechToyReviews will be appreciated.
@https://twitter.com/Techtoynews
Previous Samsung galaxy tablet 3 7inch: review
Next Samsung Galaxy V midrange smartphones