The first impression of Galaxy S6 and Galaxy S6 edge is very nice and light weight design. This time Samsung is really serious in terms of the design of two new phones, from the details such as the solid metal rim, the camera cluster, eight core 14nm processor, 3GB LPDDR4 RAM and improved user interface shows an effort to create a product not only good in appearance but also powerful in software.

The first impression of the Galaxy S6 and Galaxy S6 Edge are Light weight, both devices have only 138g to 132g weight. With a 5.1-inch display, they will be easy to use with one hand without feeling any hesitate. 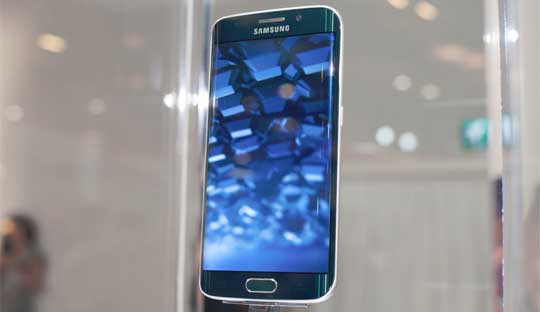 To compare the weighs of several 5.1-inch devices, such as the Xperia Z3 weighs 152g, HTC M8 160g, LG G3 149g, iPhone 6 129g and Galaxy S5 Phone 145g. The two new Galaxy devices also very thin, S6 measured 6.8mm while S6 Edge is 7mm, but in reality the Galaxy S6 Edge feels like more thin, it seems caused by curved edges on both sides. The front of the Galaxy S6 and S6 Edge features Samsung logo to the top edge, hard home button at the bottom edge, next to the two keys for back and recent app. And thanks to the glass coating on the screen of the two new devices are sparkling, plus a special chemical coating also helps to display in many different colors depending on the various angles.

The Galaxy S6 and Galaxy S6 Edge sides are protected with metal braids give luxury look. However, in Galaxy S6, the bottom with curved edges similar to the Xperia Z3 and iPhone 6/6 Plus. Further Galaxy S6 Edge, this is the first handset in the world to be equipped with curved screen on both sides. This is also affecting the overall design of the S6 Edge very thin and light, if it comes with one side curved screen will not feel good to hold and quite unsafe. The metal rim of the S6 Edge is not as thick as the S6, the back of the Galaxy S6 and Galaxy S6 Edge coated with glass. This glass coating gives these both smartphones luxury look when compared to the plastic back cover design.

The 16-megapixels cluster is designed with slightly convex edges, they will be shown up as bright as the light source. Heartbeat sensor and LED lights have moved from the bottom position is located next to the camera. But unlike their predecessors, Galaxy S6 and S6 Edge do not have removable back cover. Wireless batteries and chargers integrated directly into the device. The reason is that the Samsung decided not to use a removable back cover is so confident in their battery life on the Galaxy S6 and S6 Edge, users not to worry about the battery life for long time.

The Samsung Galaxy S6 and Galaxy S6 Edge both have 5.1-inch display use AMOLED panels with a resolution of 1440 x 2560 pixels, higher than the Full-HD used on the S5 and Note 4. Because such a high pixel density of 576 ppi should be used when in the normal range of graphical objects are displayed smoother and sharper. The color, the color saturation of the screen is not too bright as the previous Galaxy S line, but in complex lighting environment where we don’t showcase everything. With the Edge S6, the both edges screen gives an interesting look than the flat screen. It also helps the device becomes more symmetrical curve on both sides.

The Samsung Galaxy S6 and S6 Edge own refreshed TouchWiz interface based on the Material Design. Of course, the devices also come with a pre-installed Android 5.0 Lollipop. Samsung Galaxy S6 features a new, beautiful and modern style. Menu buttons also add more space-like directions from the Material Design. In particular, the Samsung’s app icons replace text with the aim to help users more easily understood and easy to hit. 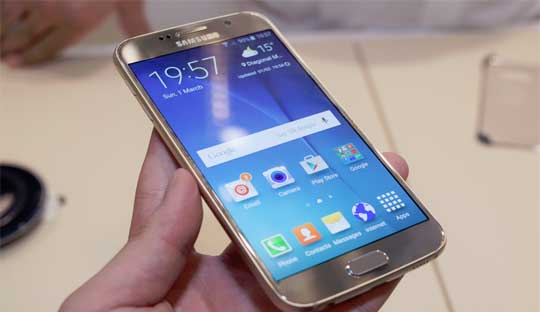 Particularly at Galaxy S6 Edge, the contoured portion of the right contains the contacts that you often contact, such as mother, father, girlfriend, wife etc. Each person will appear in a circle can be seen when he struck from the edge of the screen on the inside. Each person contact may also be assigned in a different color to when you see the detail of call log or missed call, you will know immediately because of the color. In addition, it can also display additional messages from a certain number of applications which can not feature in Note and Galaxy Note Edge. The Samsung camera application will always implicitly in ready mode and you just press and hold the home button, the photographic process will run within 0.7 seconds.

Samsung Pay is a payment method for Galaxy S6 and Galaxy S6 Edge. It just may pay with NFC could just spend the cards from traditional scanners. This technology seems Samsung has been acquired from the company called LoopPay, which is a new company in the mobile payment industry. The last thing We wanted to share with you that the Galaxy S6 and S6 Edge Specifications. Both devices are sharing the same specs, including Samsung 64-bit Exynos processor is manufactured on 14nm technology. Samsung says this is the first mobile chip was developed with this technology, which promises to deliver high performance. Besides, both smartphones have 3GB RAM to increase speed and reduce power consumption. The internal memory of the phone, with 32GB, 64GB and 128GB option, 16GB version is not available and also not supports the external microSD card.

He started this blog as a hobby to show his affection for gadgets, but over the time this hobby became professional. And now he is working as a full-time blogger, but in free time he loves watching movies and games. PayPal donation for TechToyReviews will be appreciated.
@https://twitter.com/Techtoynews
Previous Xolo A1010 with 5MP Camera and OTG supports Launched at Rs. 5,499
Next HTC One M9 with 3GB RAM and 20MP camera Launched at MWC 2015