Nokia HERE Maps mapping service which is one of the most popular and Best Map App for Windows Phone 8 operating system, but now officially offered for free on Google Play Store. 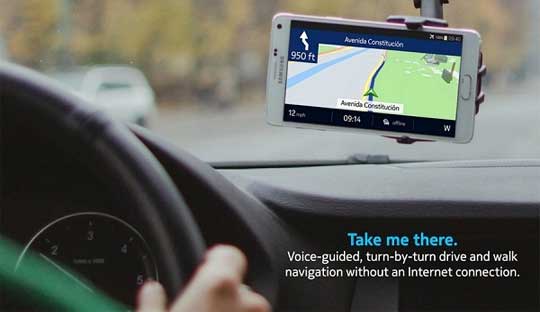 The good news for Android smartphone users when recently, one of the best offline map service called Nokia HERE Maps has been officially released for their platform.

Nokia Here Maps Windows 8 only for the Windows Phone platform, to May 8-2014, after Microsoft acquired an array of mobile devices, Nokia started distributing Nokia HERE Maps app for devices running other operating systems start of Samsung’s smartphone. Many users also can use the device on other carriers, but in a less formal way, extract the Map Here APK file from Samsung phone, then installing on your Android device.

And now, when Nokia HERE Maps officially landed for Android, users can easily download from Google Play or click this link to Download Here Maps for Android.

Although Android smartphones, Google Maps have good support, but Nokia HERE Maps is also very competitive with advantages of its own voice navigation support, allowing to view pre-loaded maps even without an Internet connection, providing public transport information, Directions and much more.

In addition, Nokia also said they are planning to Here Maps for iPhone, by the company found that many iOS users expressed an interest in this Here Maps Windows Phone application. Under the plan, Here Nokia for iOS will be released early next year. With Apple Maps still lacking, it will be a good opportunity for Nokia to develop its services.

He started this blog as a hobby to show his affection for gadgets, but over the time this hobby became professional. And now he is working as a full-time blogger, but in free time he loves watching movies and games. PayPal donation for TechToyReviews will be appreciated.
@https://twitter.com/Techtoynews
Previous Lenovo Tab A3500 : Powerful Configuration and Battery
Next Micromax Canvas Selfie smartphone with 13 Megapixel Front Camera