This is only the first version should J2 Interactive also said it would also many errors and lack of some features. This is the official port of MX Player App of Android version to lacks an immediate and Some important features such as SW decoder, SubStationAlpha subtitle formats. However, the development team said they would try to integrate as many features as possible and promises to launch the full version same as Android version. The current version of the MX Video Player for Windows / RT and Windows Phone now supports most video formats, but still lacking Matroska (.mkv); Subtitle formats supported include MicroDVDSubtitle (.sub), TMPlayerSubtitle (.txt), PowerDivXSubtitle (.psb) and WebVTTSubtitleBasic (.srt). MX Player Download link below: 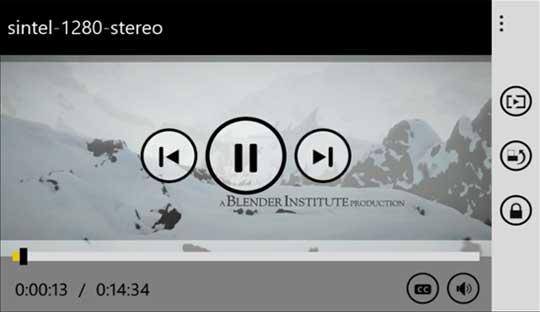 The video playback controls include play random or shuffle, repeat the first time, repeat all video; swipe across the screen to rewind time, adjust the volume, custom caption font and many more.

He started this blog as a hobby to show his affection for gadgets, but over the time this hobby became professional. And now he is working as a full-time blogger, but in free time he loves watching movies and games. PayPal donation for TechToyReviews will be appreciated.
@https://twitter.com/Techtoynews
Previous Fotodiox wood hand Grip for Sony RX100 cameras
Next Meitu M4 Hello Kitty Limited Edition: 13 MP front camera with LED Flash