Leak information about the Motorola Droid Turbo with 21 megapixel camera with 4K videos shooting ability. There are not many smartphone owners high resolution cameras like, Sony Xperia Z1, Z2 or Xperia Z3 and Lumia 1520 are currently using 20 to 21 MP Cameras. As you can see below, this is a Verizon Droid Turbo and it will likely be released a black version which was leaked ago. 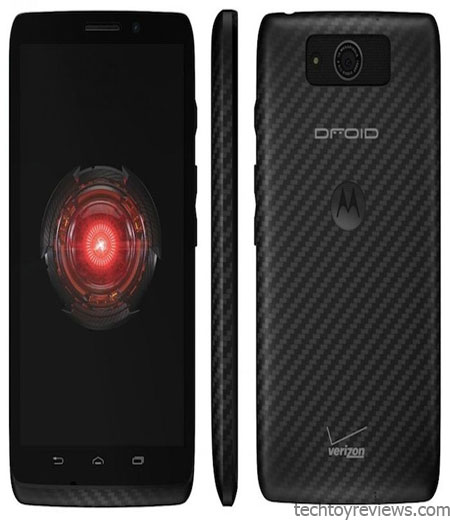 After first seeing hellomotoHK site last month, now phone Motorola Droid Turbo was found in the manual. Published by MotoFirmware.com, in the detailed instructions relating to the Motorola Droid Rumors is manufactured for Verizon, same as the previous generation Motorola Droid.

Motorola Droid Turbo has 5.2-inch screen with a resolution of 1440×2560 pixels and a pixel density of 565 ppi. However, the navigation keys are not displayed on the screen like before, instead they will be arranged below the screen. One detail that many people will notice is Motorola Droid Turbo equipped with a camera with a resolution up to 21MP along with dual LED flash and 2 MP front camera. Of course, this smartphone is also equipped with Motorola’s applications including Moto Actions, Connect, and Display. This smart phone comes with batteries up to 3900 mAh capacity, but can be fully charged in 3 hours.

In other words, this new phone can provide impressive specifications than the current Motorola smartphone. This information shows that Motorola Droid Turbo smartphone is actually a very powerful and it will probably be Motorola’s flagship device in the smartphone segment.

Motorola Droid Turbo also expected to feature the 2.7 GHz quad-core with Qualcomm Snapdragon 805 chip and Adreno 420 GPU. 3 GB of RAM and 32GB of internal memory. Currently no clear official launch date of the Motorola Moto Turbo, but Motorola Droid Rumors say that it will appear in this October.

He started this blog as a hobby to show his affection for gadgets, but over the time this hobby became professional. And now he is working as a full-time blogger, but in free time he loves watching movies and games. PayPal donation for TechToyReviews will be appreciated.
@https://twitter.com/Techtoynews
Previous Gionee GPad G5 – Powerful Hexa Core Processor
Next Nokia Lumia 525 Review