While people think of Micromax India was used to launch an Android device, the company has launched the Micromax Canvas Nitro A310, the Micromax new mobile line of Canvas. 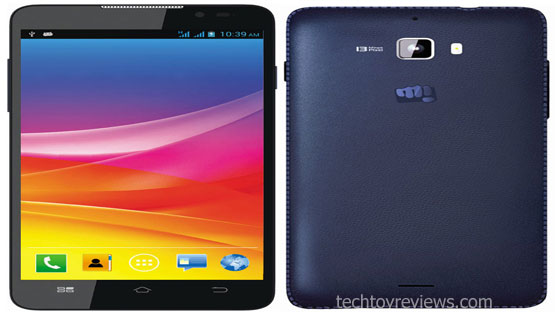 Micromax Canvas phone has 5-inch IPS display, resolution of 1280×720 pixels. It has a leatherette back cover design. Backed by 1.7GHz octa-core MediaTek’s MT6592 processor with Mali 450 GPU of 700MHz clocks and runs on Android 4.4 KitKat OS. Primary Camera of 13 MP with autofocus capability and LED flash, front camera of 5 MP with selfies features, clicking pictures by the volume button.

Micromax Canvas Nitro A310 interface also comes with a host of exciting software features such as Smart Gestures, Smart Alerts, Blinkscreen which is a new lock screen, Quicklook provide information, weather, Facebook, Twitter, etc. This Micromax phone will be sold with two colors are blue and white for about Rs.12,990 and this is not the price of one line of Android smartphone that people expect prices under 13,000.

Micromax Canvas Nitro A310 has 2GB of RAM, 8GB of internal memory, this memory can also be expanded up to 32GB with a microSD card. Micromax mobiles also have 3G connectivity, WI-Fi 802.11 b / g / n, Bluetooth 4.0 and GPS. Micromax canvas hd has 2500 mAh battery capacity.

He started this blog as a hobby to show his affection for gadgets, but over the time this hobby became professional. And now he is working as a full-time blogger, but in free time he loves watching movies and games. PayPal donation for TechToyReviews will be appreciated.
@https://twitter.com/Techtoynews
Previous iPhone – 7 years journey – 2007 to 2014
Next Lumia 530 Quick Review: Best Dual Sim Window Smartphone