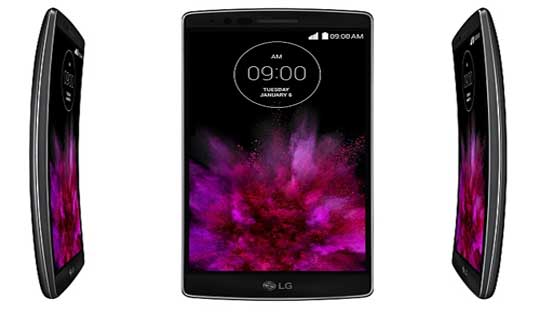 However, the device will be improved and upgraded technology strengthened by P-OLED screen is covered by additional layers of glass glass 3. According to LG, the glass improves endurance by 20% for the device. In addition, the curvature radius is expanded from 400 mm up to 700 mm of the LG G Flex 2 is confirmed will help bring the viewing experience at all angles really impressive than ever.

Not only that, latest LG G Flex 2 news is that the ability to recover from scratch G Flex 2 has achieved a quantum leap to be able to decrease just in 30 seconds to 3 minutes depending on ideal temperatures.

Configuration, G Flex 2 is equipped with a smaller screen than the old version with size 6 inch, now 5.5 inch Full HD display with a resolution of 1920×1080 pixels, Snapdragon 810 processor, running 64-bit 2 GHz Octa-core processor. The 2 GB of RAM with inbuilt 16 GB memory and 3 GB RAM version with 32 GB of RAM, can be expanded up to 2 TB via the memory card slot.

Behind the G Flex 2 is a 13 megapixel camera integrated with optical stabilization (OIS) and features laser auto focus same as on the LG G3, while the front camera is 2.1 megapixel. It’s a 9.4 mm thin, weighs only 152 grams and is pre-installed Android 5.0 Lollipop operating system when on sale.

In the statement, LG did not forget to introduce new features like Gesture Shot helps users to easily capture the perfect selfie photograph, Gesture View makes it easy to check your photo preview and Glance View features can display important information such as time, messages, missed calls with a sliding screen to manipulate even when the screen is off.

LG G Flex 2 will have two colors for users to choose from including metallic silver and red flamenco. The phone will be officially on sale end of this month in the Korean market and then many other markets around the globe in the future. Selling price of the product is yet to be revealed. Stay tuned for LG Flex 2 Review.

He started this blog as a hobby to show his affection for gadgets, but over the time this hobby became professional. And now he is working as a full-time blogger, but in free time he loves watching movies and games. PayPal donation for TechToyReviews will be appreciated.
@https://twitter.com/Techtoynews
Previous Microsoft Launched Nokia 215 – Nokia 215 Dual SIM only in $29
Next ZenFone 2 officially Launched with 4 GB RAM at CES 2015