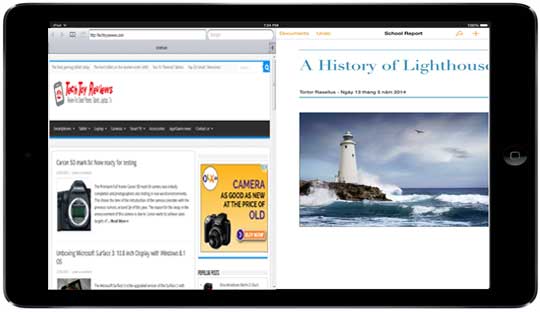 We are supposed to have a multitasking split screen feature and multi-user logins. Talking about multitasking features, Apple iPad 12 has a split mode 1/2, 1/3 or 2/3 to 2 apps tied up simultaneously, moreover each app itself can also open in two different windows to compare the content (like two parallel Safari web, two parallel document pages). The source added that Apple had shared plans to launch it last year, but the plan was postponed. The Sooner the WWDC 2015 conference to be held in June, Apple revealed it for people to know more about it, and most likely these are the hallmarks of iOS 9.

The multiuser feature is like on Mac, Windows and Android today, which is that each account will have their own app and data. Another person cannot access the other account, suitable for use in businesses, schools where many workers and students can share one device.

Initially this feature is expected to appear on Apple iOS 9, maybe it will appear next version of iOS 9.1 or 9.2. Reportedly, Apple still have to optimize the software, hardware and product launch date has not been selected. Besides bringing multitasking and multi-user, Apple also contemplated change, where all core software as Siri or Notification Center to take advantage more effectively on large screen.

He started this blog as a hobby to show his affection for gadgets, but over the time this hobby became professional. And now he is working as a full-time blogger, but in free time he loves watching movies and games. PayPal donation for TechToyReviews will be appreciated.
@https://twitter.com/Techtoynews
Previous Canon 5D mark IV: Now ready for testing
Next Razer Firefly Mouse pads with LED lights for Gamers