Freaker Sneaks is known for its customized sneakers, and in the past, they have customized sneakers dedicated to PlayStation 4 and even the SNES, but now it’s time to celebrate the popular NES with a pair of ultra exclusive shoes called Jordan NES IV. 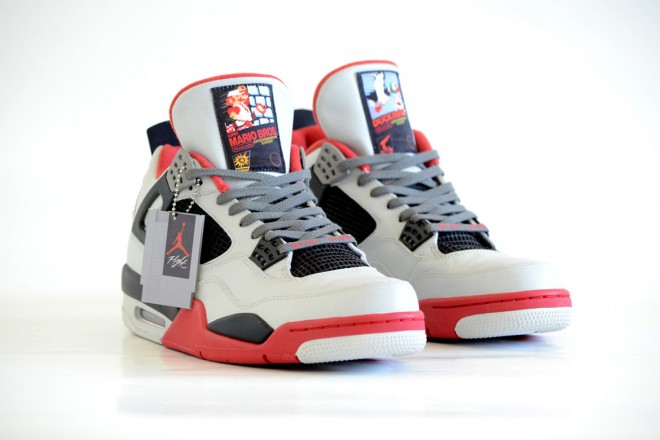 The Jordan NES IV design resembles the historic console finishes. It is a custom version of the Air Jordan 4 and featuring the classic gaming system’s color palette of off-white, red, black and gray.

The shoes completing itself with the images of the two historic games, Super Mario Bros. and Duck Hunt, in addition to the label of the shoes faithfully reproduces the design of the NES cartridges.

On the back of sneakers we find the D-Pad, and “A and B” buttons are built into the heel, almost built with the maniacal care and pressable, because they are real buttons.

At the moment we do not know its cost, but considering that Jordan NES IV will be produced in a ultra-limited edition, it speaks only 10 pieces, we’re pretty sure that the price is not cheap.

Last year, Freaker Sneaks had designed Jordan “US Super Nintendo” IV NBA Jam Edition, which is still available for purchase at the store with a massive price tag of $1,250. So, the newly announced sneakers will have the same price?

Thanks for reading! If my article helped you, I would be happy if you visit Techtoyreviews again and follow it on Social media. This article contains partner "affiliate" links. Clicking on it will take you to the provider and if you make a purchase, Techtoyreviews will receive a small amount of support.
@Techtoynews
Previous Honor Note 9 Leaked Live Images Show Bezel-less design, No Home Button, and More
Next UMIDIGI C Note 2 Price in UK, Features, Specs and More