Today Facebook has officially released Riff applications with the aim of connecting users together via Video. It sounds a bit confusing, but actually very simple application. Riff application was created to allow more people to create short videos up to 20 seconds. 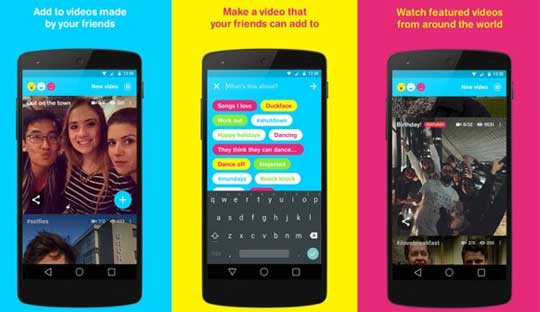 A Facebook Riff application that allows multiple users to work together to create a long video. The way the app works as follows: First you will create a video on certain topics, to build a complete video, you need to select the topic, the topic will be marked with the hashtag like #Techtoyreviews, then share with friends. These friends can contribute to a short clip of their own to create a video longer than the original. This process is repeated with many people and finally we get a one rich video with many improvisations and also very creative.

With the launch of Riff application, Facebook is expected to directly compete short video sharing applications such as Vine had to storm a long time on the Internet. But with Riff app, need more users, while at the same time friends together to build a certain type video and Riff group.

Previously, Facebook has many applications, but not really noticeable because the shadow of the great Facebook application, so the application to install a small split almost unnecessary. With Facebook Riff, hope users will be thrilled with their own series of videos created and shared by numerous friends.

Facebook will also have a separate area to promote the Riff video be interested in the Featured app. Right now you can download this app for Android and iOS.

He started this blog as a hobby to show his affection for gadgets, but over the time this hobby became professional. And now he is working as a full-time blogger, but in free time he loves watching movies and games. PayPal donation for TechToyReviews will be appreciated.
@https://twitter.com/Techtoynews
Previous Acer Chromebase All in One PC with touchscreen and Chrome OS
Next Nikon 1 J5 with 20.8MP BSI sensor and 4K video recording Launched at $ 499