Ulefone recently launched the Paris, a phone which promises great performance with Ultra-thin design which is now available for purchase at a very affordable price exclusively on EverBuying.net, priced at $129.99. 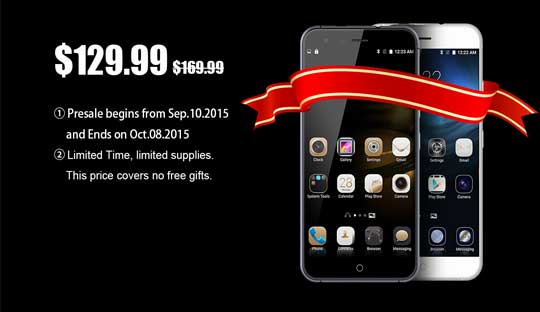 The Ulefone Paris one of the best choices in the ever-growing list of budget 64-bit Octa-core smart phones for domestic to worldwide market, and the phone does leave an impression, thanks to some new features it comes with. Although the Ulefone Products is not the cheapest option available in the market today, but in this exclusive Pre-sale from EverBuying this device is available only in $129.99. A pre-sale offer already started and will be end on October 8,2015. And then it will be back to regular price of $169.99, with this price user can get some free gifts such as Free Flip Cover, Free Tempered Glass Screen protector with Free shipping and 2-year Warranty.

Ulefone Paris is already going well, and also gets the benefits of the success of their previous devices. The Paris offer decent specifications for a good price, and after sales support should not be a problem at all. It comes with a 5 inch IPS display panel which packs an HD resolution of 720×1280 pixels and also covered with a Gorilla Glass 3.

The device features a 13-megapixel OmniVision primary camera which is quite rare in budget Octa-core phones. The front has a 5-megapixels snapper for wide selfies and decent video calling. The phone comes with the 64-bit MediaTek MT6753 octa-core processor, Mali-T720 GPU and coupled with a 2GB of RAM, which means multitasking will not be a problem too.

The device comes with a 16GB of internal storage which can be expanded up to 64GB via a microSD card. It packs a 2200mAh battery which should be able to take you through one day. And for connectivity includes 4G FDD-LTE, 3G, WiFi 802.11b/g/n, GPS, A-GPS, Bluetooth 4.0 and Micro USB 2.0 options.

Just one word, the Ulefone Paris with a 13MP rear and 5MP front camera along with Octa-core processor at just $129.99, that would’ve made the Paris one of the top contenders in the budget smartphone market.

Thanks for reading! If my article helped you, I would be happy if you visit Techtoyreviews again and follow it on Social media. This article contains partner "affiliate" links. Clicking on it will take you to the provider and if you make a purchase, Techtoyreviews will receive a small amount of support.
@Techtoynews
Previous Gamevice for iPhone: Portable Gaming Kit for iOS devices
Next Sony RAID Mobile Hard Drives: 4TB/6TB, Thunderbolt 2 and transfer speed 440MB/s Unveiled