Asus Padfone S Plus with 3GB Ram Launched in Malaysia

The Asus Padfone S Plus, the upgraded version of the Padfone S has officially available in Malaysia.

The Malaysian company called Dynamics Distribution announced on their Facebook page to beginning of sales in the local market of Asus PadFone S Plus smartphone. 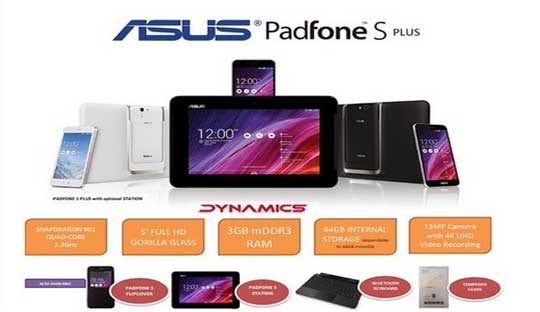 We all know the Asus Padfone S smartphone, which comes with a docking station in the form of a tablet. You can insert your smartphone in the dock, and thus get a tablet that will work on the Padfone S Tablet Phone. In addition, the tablet has a battery and a display, so it will only need processor of a smartphone.

Today, we have latest information about the Asus Padfone S Plus – an updated version of the Padfone S. Some specifications of the device is the same, namely the display with a diagonal of 5 inches and a resolution of 1080 x 1920 pixels, it has a 2.3GHz quad-core processor with Qualcomm Snapdragon 801 chipset, besides – rear camera of 13-megapixel sensor and battery capacity of 2300 mAh.

Now a few changes about the Asus Padfone S Plus, the amount of increased RAM to 3 GB, and internal memory of the 64 GB instead of just 16GB as previous version and 10.5GB space available for the user.

The Asus Padfone S Plus price is about $ 302, will be available first in Malaysia. A docking station that turns a smartphone into a tablet, is optional not including in this price range.

He started this blog as a hobby to show his affection for gadgets, but over the time this hobby became professional. And now he is working as a full-time blogger, but in free time he loves watching movies and games. PayPal donation for TechToyReviews will be appreciated.
@https://twitter.com/Techtoynews
Previous An Extreme discount on Canon C100 and C300 camera: Preparing for C300 mark II
Next Canon EOS Utility, Picture Style Editor and DPP update: support new cameras and lenses