AMD has launched A10-7870K APU from the powerful Kaveri line for desktop is geared toward gamers. 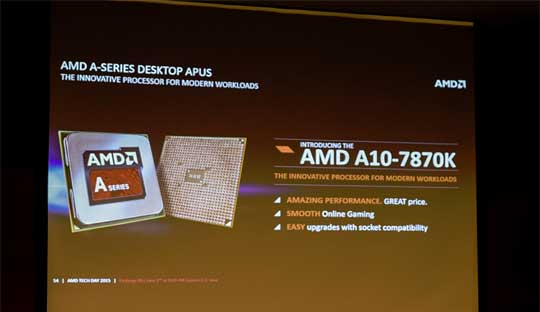 The AMD A10-7870K APU GPU clock increased up to 20% compared to its predecessor, from 720MHz up to 866MHz to deliver better performance. Meanwhile, 95W figure remained. The AMD A10 7870 K APU supports FreeSync technology, which is applied to reduce the phenomenon and image faults occur due to the lack of synchronization between the GPU speed and refresh rate of the monitor.

He started this blog as a hobby to show his affection for gadgets, but over the time this hobby became professional. And now he is working as a full-time blogger, but in free time he loves watching movies and games. PayPal donation for TechToyReviews will be appreciated.
@https://twitter.com/Techtoynews
Previous Pentax Camera with the Sony Fullframe sensor?: Rumor
Next Have you reserved your free Windows 10 Copy?