Wileyfox Swift 2X was first launched back in January this year and now the British smartphone manufacturer offers something extra is not done yet, because right now you can get it for a special price with a free Amazon Echo Dot gift worth £50. 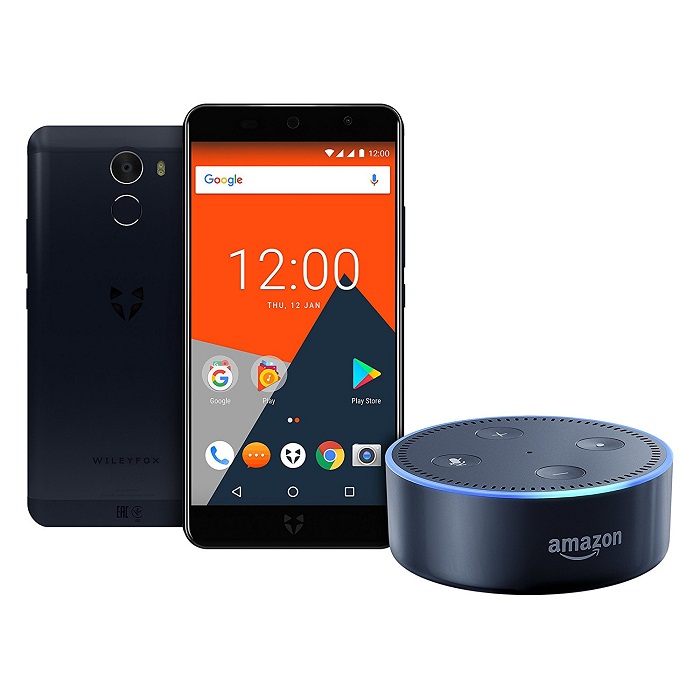 The special sale price for the Wileyfox Swift 2X with the bonus £10 discount is £209.99 and the free Amazon Echo Dot, shaped like a hockey puck like its predecessor. You can get this particular deal on Amazon.co.uk online store, and the device comes in Black and Gold color options.

The Amazon Echo Dot is also controlled by voice controlled assistant Alexa. The new version allows also users to connect it to larger speakers. It comes with an improved speech processor for better voice recognition and Echo Spatial Perception (ESP) supports, which will ensure users with multiple Echo Dot devices will be served by the one closest to them.

The voice-controlled speakers are always ready to take commands from the users and can answer questions, read news, or even play music. And there will be thousands of Alexa skills available for UK customers including skills from Spotify, Uber, Philips Hue, Hive, Just Eat, National Rail Enquiries, and more.

Coming to the Wileyfox Swift 2X, a successor of last year’s Swift 2. It has a 5.2-inch Full HD (1920 x 1080 pixels) screen, is powered by an Octa-Core Snapdragon 430 SoC, packs a 16-megapixel rear camera with PDAF and an 8-megapixel front camera. It has unibody metal design, has a fingerprint sensor with NXP NQ220 technology on the back and comes with hybrid dual SIM support along with 4G LTE connectivity.

It runs on Android 7.1.2 Nougat operating system and 3010mAh battery with Qualcomm Quick Charge 3.0 out of the box. The device packs 3GB of RAM, 32GB of internal storage with expandable memory card slot up to 64GB.

He is newbie on the Techtoyreviews. An enthusiastic mechanical qualifier who additionally Interested in the latest gadgets and tech. An exceptionally tech savvy who is always discovered reading or writing on technology. In spare time like to peruse books and playing Cricket. PayPal donation for TechToyReviews will be appreciated.
@jigneshdudakiya
Previous Apple AirPower Charging Pad: Wireless Charging to Charge Multiple Devices At the Same Time
Next HTC Ocean Life: HTC U11 Lite or Mini Variant With Android One Leaked