After a long time, Sony introduced Xperia 1 IV and praised its flagship as a “powerhouse for creative people”, especially since many current technologies from the various product areas such as photography, entertainment, and gaming have flowed into the smartphone. Thanks to powerful audio properties, intense music experiences, and smooth game streaming, these will be the best Sony Xperia phones today.

Of course, the photo and video functionality are relevant for us. Like its competitors, Sony relies on multiple cameras here but also makes a mark with an optical zoom. According to Sony, the new Xperia 1IV is the world’s first smartphone with a true optical zoom lens. Unlike the competition, Sony does without the currently high resolutions that allow 48 or 108 megapixels but instead limits the three rear camera modules and the front camera to 12 megapixels. In addition, the Sony Xperia 1 IV enables slow-motion recordings in 4K-UHD with 120 frames per second (fps) for all cameras and shines with strong photo functions.

The Xperia 1 IV is equipped with a triple camera: a camera module with a 16mm ultra-wide-angle lens, a 24mm wide-angle lens, and a groundbreaking new, true optical telephoto zoom lens with a focal length range of 85 to 125 mm in 35mm format.

All camera modules have their own “Exmor RS for mobile” image sensor with 12 megapixels and a readout speed of up to 120 fps. The Sony Xperia 1 IV supports up to 5x 4K slow-motion recording at 120 fps, real-time eye autofocus, and real-time tracking for photos with any lens. The combination of a 3D iToF sensor for depth measurement and artificial intelligence (AI)-based subject recognition also makes it possible to precisely focus and track subjects even in poor lighting conditions.

The Zeiss optics have been specially calibrated for Xperia. The “ZEISS T*” anti-reflective coating on the triple main camera reduces reflections from the sun or artificial light sources, thus ensuring a realistic display and high contrast.

The front camera is also equipped with an “Exmor RS for mobile” image sensor, which is larger than that of the previous model. It offers a resolution of 12 megapixels. The sensor minimizes image noise in low light and enables selfie shots in 4K HDR.

The Xperia 1 IV offers unparalleled video capabilities. Based on direct feedback from videographers, Sony has developed Videography Pro, which centralizes all settings for videos. Settings such as focus, exposure, and white balance can be easily adjusted – even during recording.

Fast scenes and videos with up to 5x slow motion can also be captured and played back with the Xperia 1 IV thanks to the new function of recording across all lenses of the triple main camera with 4K HDR and 120 fps. The latest optical SteadyShot with FlawlessEye makes it easier than ever to capture smooth, shake-free video. In addition, the Xperia 1 IV supports Eye AF and object tracking for videos, so that subjects are always in focus and thus have more time for image composition.

In addition, Sony Xperia 2022 smartphone also features a multi-frame video recording function, which makes it possible to record videos with a wider dynamic range without sacrificing resolution. In addition, the Xperia 1 IV allows seamless zooming from the ultra-wide-angle to the telephoto perspective, opening up additional creative possibilities.

The Xperia 1 IV simplifies live streaming while improving quality. When using Videography Pro for live streams, the device supports Eye AF and object tracking. With its powerful optical telephoto zoom lens, attractive bokeh effects, and sophisticated autofocus technology, the Xperia 1 IV delivers breathtaking images. It features real-time eye-detection autofocus and offers 20fps burst shooting with AE (Auto Exposure)/AF tracking in HDR on all three lenses – enabling portraits of people and animals, even in fast-moving or shooting conditions are unfavorable. In addition, the Xperia 1 IV boasts an AI-based white balance that detects and corrects the colors so that they appear natural even in difficult lighting conditions.

Cinematography Pro “Powered by CineAlta” allows recording films with parameters and color settings similar to those of professionals. The triple main camera supports 4K recordings with a frame rate of 120 fps and up to 5x slow motion.

Thanks to the 21:9 display with 120Hz refresh rate and 240Hz motion blur reduction, which refreshes the display an incredible 240 times per second, gamers are put in the middle of the action – for really fluid gameplay, free of shake and with crystal clear images. The 240 Hz touch sampling frequency ensures that the action runs exactly as the user wants it to.

The Sony Xperia 1 IV has overheating protection (Heat Suppression Power Control), which supplies the device systems with power directly when operating with a connected charging cable instead of charging the battery – this reduces the thermal load and protects the battery.

The device is equipped with new, full-fledged stereo speakers that optimize the sound of bass and kick drums and also reproduce 360 ​​Reality Audio (360RA). Unique hardware decoding optimizes sound quality when listening to music on TIDAL and nugs.net12. The 360 ​​Reality Audio Upmix feature converts stereo sources into multi-channel sound sources such as 360RA13. In addition, the Xperia 1 IV supports the DSEE Ultimate function, which increases the quality of streaming music so that it comes close to high-resolution sound sources. With an upcoming software update, the Xperia 1 IV will also support Bluetooth LE Audio to reduce sound delays.

With its 6.5-inch 4K HDR OLED display with a 120 Hz refresh rate in 21:9 format, the Sony Xperia 1 IV offers a uniquely immersive viewing experience. The Xperia 1 IV’s notch-free display is 50% brighter than the previous model and features Real-Time HDR that improves visibility in bright and dark areas, even in very bright environments.

Like its predecessor, the Xperia 1 III (REVIEW), the Xperia 1 IV benefits from the X1 for mobile engine, which applies BRAVIA HDR remastering technology to all content displayed, making it expressive. Streaming content is more lifelike than ever, with more contrast, color, and clarity. Thanks to the ongoing integration of Dolby Atmos, tuned in collaboration with Sony Pictures Entertainment, the smartphone reproduces immersive, multi-dimensional sound with headphones or the integrated full-stage stereo speakers.

The Sony Xperia 1 IV is equipped with the Snapdragon 8 Gen 1 mobile platform that supports 5G and Wi-Fi 6E and offers 12 GB RAM and 256 GB ROM. The long-lasting 5,000 mAh battery with a lifespan of up to 3 years has Qi charging and a quick charge function that charges the battery to 50% in 30 minutes. The Xperia 1 IV is robust thanks to Corning Gorilla Glass Victus on the front and back and IP65 (water and dust resistant).

Early buyers who already have pre-ordered the Xperia 1 IV through the Amazon.com, Bhphotovideo.com, and Amazon.co.uk will be bundled with the Sony WH-1000XM4 noise-canceling headphones as an early bird gift.

He started this blog as a hobby to show his affection for gadgets, but over the time this hobby became professional. And now he is working as a full-time blogger, but in free time he loves watching movies and games. PayPal donation for TechToyReviews will be appreciated.
@https://twitter.com/Techtoynews
Previous Blackview unveils BL8800 series: World’s first 5G thermal, night vision rugged phone
Next LG unveils 26WQ500 office monitor with HDR10, 75Hz, and 5ms 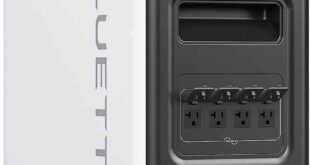