Samsung Galaxy A8s price in China has been set at CNY 2,999 – approximately $434 for the 6GB RAM with 128GB storage model. It is available for order from today and ships from December 31st in China, however, the Elf Blue and Aurora Black color models will be available only from January 15, 2018.

After getting listed on WiFi certification website, and leaked in quality renders, the Samsung Galaxy A8s has been officially launched in China. The handset comes with all new Infinity-O display – a hole in the 6.4-inch FHD+ display, Triple Rear Cameras and fingerprint sensor from the Samsung being launched today. 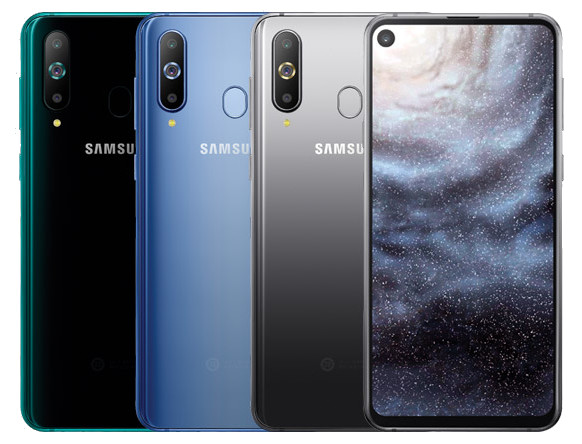 The Samsung Galaxy A8s price has not announced yet, but it will be available for pre-order from December 21st in China and comes in Blue, Gray, and Green color options.

The Samsung Galaxy A8s features a 6.4-inch 2.5D curved glass Full HD+ (2340 × 1080 pixels) resolution screen with an in-display camera, which it calls Infinity-O display that has a small cut out. It is powered by a 2.2 GHz octa-core processor which supported by Snapdragon 710 10nm Mobile Platform with Adreno 616 GPU and 6GB / 8GB of RAM. It packs a 128GB of inbuilt storage which can be expanded via microSD card up to 512GB.

On the camera front, the Galaxy A8s comes with triple rear cameras that include a main 24-megapixel sensor with f/1.7 aperture, 10-megapixel Telephoto lens with a f/2.4 aperture for 2x optical zoom, and a 5-megapixel camera to capture depth information for portrait shots and LED flash. For selfie, there is a 24-megapixel front-facing camera with f/2.0 aperture.

He started this blog as a hobby to show his affection for gadgets, but over the time this hobby became professional. And now he is working as a full-time blogger, but in free time he loves watching movies and games. PayPal donation for TechToyReviews will be appreciated.
@https://twitter.com/Techtoynews
Previous Xiaomi Mi A1 Starts Getting Android Pie Stable Update
Next The Walking Dead: The Final Season Episode 3: Broken Toys will Arrive on January 15