Oppo, on Tuesday has been launched the successor of Oppo R7 Plus in China, the Oppo R7 Plus with 4GB RAM is the new high-end device in the R7 series that has been spotted on the Oppo’s official Chinese website and also open for pre-order. It’s a China Unicom variant has been priced at approx. $470 USD, while the unlocked variants will cost around $515 USD. 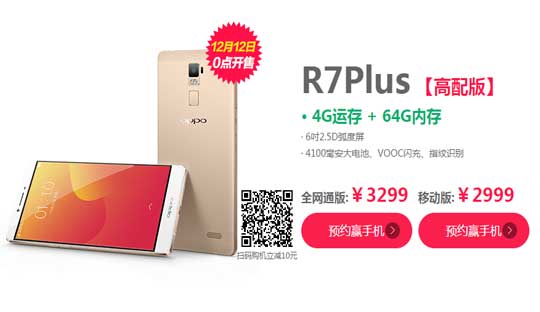 While talking about the new Oppo R7 Plus specs, quite similar to its predecessor. However, the difference lies in its capacity of RAM and storage include 4GB of RAM and 64GB of ROM, compared to the 3GB of RAM and 32GB of native storage on the R7 Plus.

Other highlights of the Oppo R7 Plus with 4GB RAM variant features a 6.0-inch AMOLED display with 2.5D arc glass screen design and full HD 1920 x 1080 pixels resolution that can translate a pixel density of 367ppi. The device also protected by Corning Gorilla Glass 3. It is powered by a 1.5 GHz octa-core processor which supported by 64-bit MediaTek MT6795 chipset along with Adreno 405 GPU.

The handset share camera features as R7 Plus includes a l ISOCELL sensor, f/2.2 lens, Flash Shoot snapshot technology, hybrid AF system includes Dual Drive technology focus on contrast recognition and AF phase technology. It has an 8-megapixel front-facing camera for self portraits and video calling. The device comes equipped with a fingerprint sensor on the back panel to unlock the device.

The handset runs on Android 5.1 Lollipop based on Color OS 2.1 UI on top. It packs a 4100mAh battery with VOOC Rapid Charge technology that’s claimed drive enough power to run the phone for a few hours after just a few minutes of outlet time.

Check out Oppo R7 Plus Price below:

He started this blog as a hobby to show his affection for gadgets, but over the time this hobby became professional. And now he is working as a full-time blogger, but in free time he loves watching movies and games. PayPal donation for TechToyReviews will be appreciated.
@ankit4554
Previous Google Pixel C Tablet goes Official for $499
Next Moto X Pure Edition in the US up for Android 6.0 Marshmallow