Nokia today on Monday announced two new feature phones, or the “newly renovated” Nokia 105 and Nokia 130. When all the major brands are busy launching various kinds of smart smartphones, HMD Global released the Nokia 3310 (2017) and now comes with the 105 and 130 feature phones. 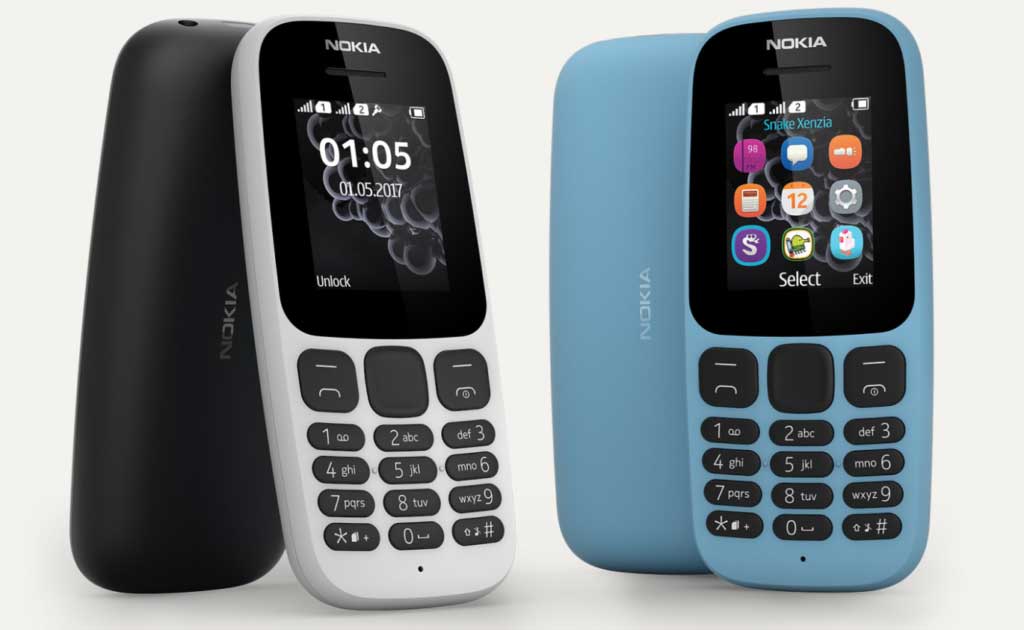 The Nokia 105 was originally introduced in 2013, only to be updated in 2015 by Microsoft, until you get to today, in 2017, with its third edition. This time the brand back into the hands of Nokia, or better to call HMD Global, which does not upset the basic specifications of the device while introducing some changes.

Nokia 105 (2017) this time comes with a larger a display, coming to 1.8-inch, and a more modern design with less square or boxy shapes. Under the hood is the same hardware equipment that characterized its predecessors, along with an 800mAh battery capacity is rated to provide up to 15 hours of talk-time. There is a very simple hardware, but more than enough to manage optimally the Nokia Series 30+ operating system. Obviously not even miss the classic Snake game, revived in the latest Snake Xenzia version.

Among other features, we find a LED flashlight, polycarbonate body, FM radio, 3.5mm audio jack and micro USB 2.0 port. Nokia 105 price is just $14.5 for the single version while the dual SIM variant will cost $15 which appears extremely interesting as well as suitable for anyone looking for a reliable and affordable feature phone. It is available in Black, White and Blue color options.

Coming to the Nokia 130 (2017), the first variant presented back in 2014, it is also a feature phone but with slightly more advanced features than Nokia 105. The basic specifications are very similar, although in this case, the internal storage is up to 8MB, also supports MicroSD slot to add more memory up to 32GB, 1020mAh battery which can provide up to 44 hours of FM radio playback time and up to a month of standby. It has also the same Nokia Series 30+ OS and also comes with pre-loaded 5 Gameloft games.

It also features Bluetooth connectivity and supports wireless Bluetooth headsets and it also includes a LED flash light. It is equipped with a camera on its rear panel. It measures 111.5 x 48.4 x 14.2 mm and it comes in Red, Grey and Black color options. The Nokia 130 price is set to $21.5 and it will also be available in single SIM and dual SIM options.

He started this blog as a hobby to show his affection for gadgets, but over the time this hobby became professional. And now he is working as a full-time blogger, but in free time he loves watching movies and games. PayPal donation for TechToyReviews will be appreciated.
@ankit4554
Previous Samsung Galaxy C10 Leaked in Live Images, Dual Rear Camera and Bixby Spotted
Next Plantronics Voyager 8200 UC Bluetooth Headset with Noise Cancellation Announced