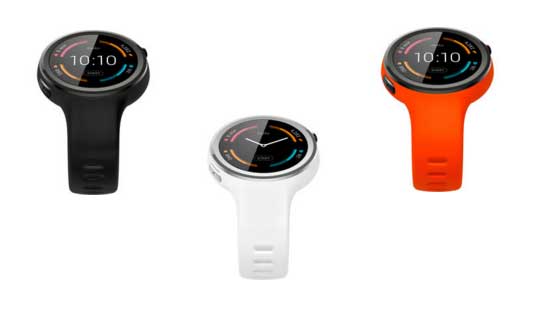 Motorola launched the Moto 360 Sport in USA in early this year, with the three color options costing $299.99. There is a total of 3 colors such as Orange, Black and White. It suits on both men and women, For women, it comes in only the 42mm size. While men have two a 46mm and 42mm design options. This watch feature an optical heart rate monitor along with all basic sensors such as accelerometer, ambient light sensor, a gyroscope, apart from a vibration and haptic engine.

Moto 360 Sport features a 1.37-inch display with (360×325 pixels) screen resolution and a pixel density of 263ppi. It has AnyLight Hybrid display that also protected by Corning Gorilla Glass 3. It is powered by 1.2 GHz quad-core processor that’s backed by a Qualcomm Snapdragon 400 SoC clubbed with Adreno 305 GPU. It packs 512MB of RAM; 4GB of internal storage and 300mAh battery under the hood, which as the company claims could last up to 1.5 days of mixed use with Ambient off.

For connectivity, it supports Wi-Fi 802.11 b/g and Bluetooth 4.0 LE options; compatible with Android 4.3 or higher and iOS 8.2 and higher. It also has built-in GPS and better heart rate sensors, it accurately tracks human body condition. It is built out of ​​of hard plastic material, with good dust and water resistant body. It has an IP67 rating, which means that it can be immersed in up to 3′ (0.9m) of fresh water for up to 30 minutes.

Thanks for reading! If my article helped you, I would be happy if you visit Techtoyreviews again and follow it on Social media. This article contains partner "affiliate" links. Clicking on it will take you to the provider and if you make a purchase, Techtoyreviews will receive a small amount of support.
@Techtoynews
Previous Nubia Z11 Mini with 5.0-inch Display, Snapdragon 617 SoC and 16MP Camera Launched
Next Posh Mobile Micro X S240: Super Tiny Android Smartphone, Priced at $49