For those who use dual SIM to communicate, if they think to buy iPhone, which only available in Single SIM. However Krimston TWO Dual SIM case for iPhone will solve this problem which helps to turn your iPhone into a true dual SIM smartphone.

Previously, we also have the tool with similar features called Gmate, but it only works with the iPhone jailbreak, Krimston TWO does not do so, it has built-in mobile chips and operates almost independently. Unlike the previous dual SIM cases, Krimston TWO has trendy style and modern design as well as much more beautiful. On how it works, after mounting the Krimston TWO on iPhone Lightning port, insert your second SIM into the case, download special application, and then synchronize your contacts to use.

Krimston TWO operates almost independently so it has its own directory, can access 3G, and especially within the integrated battery. So, it also acts as a battery backup for the iPhone in any emergency. In short, when used normally, you will work on the primary SIM, but when you open the Krimston TWO app, it will work automatically and your iPhone is ready to work with dual SIM connectivity.

As known, Krimston TWO application also allows users to track 3G data usage, as well as save battery usage time. You can also do SMS on this SIM. When there is an incoming call or message notifications to the second SIM, the LED will blink to indicate at the top. 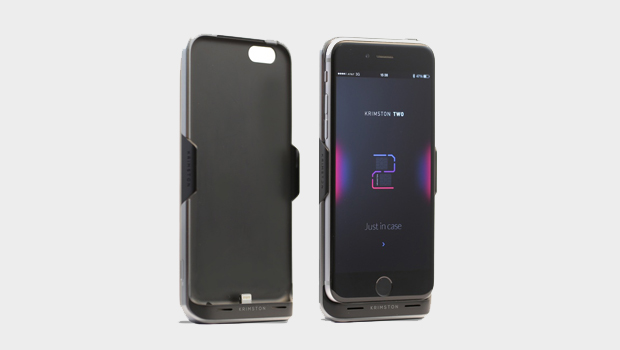 As of now, Krimston TWO only supports iPhone 6/6s and it is fundraising project on Kickstarter, it’s still under process and wait for people to help (the progress already achieved up to 40%). To support and product testing, customers have to spend up to $99 USD, and delivery time is expected to be around July 2016. In case the project will fail, donated amount will be refunded.

Thanks for reading! If my article helped you, I would be happy if you visit Techtoyreviews again and follow it on Social media. This article contains partner "affiliate" links. Clicking on it will take you to the provider and if you make a purchase, Techtoyreviews will receive a small amount of support.
@Techtoynews
Previous iPhone SE Camera Teardown by Chipworks: Front has Omnivision and Back with Sony Sensors
Next Motorola Moto X3 Tipped to Sport a 5.0-inch Display