Following the appearance of video of the 4 Inch iPhone 2016 variant, the metallic designed version of the alleged iPhone 4 inch, a very short video clip shows us the prototype of new Apple 4 Inch iPhone has surfaced online and about to be launched on the market. 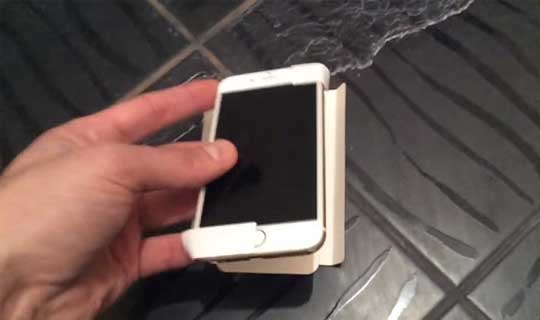 The video, posted by M I C Gadget, shows a mini clip of the phone that will be similar to the iPhone 5c, but the back panel is ​​entirely made of metal. However, the leaked video showing inexpensive iPhone model will be a smaller version of the iPhone 6s or iPhone 6. The handset will also be equipped with integrated fingerprint sensor featured on the home button.

In fact, there is a lot of information leaked on 4 inch iPhone, even some actual photographs are also posted. Currently, the device’s name is still a mystery, it could be iPhone 7c, 4 Inch iPhone 6C or completely new series as iPhone 5e.

As for iPhone 4 inch specifications points to A8 processor powering the device; 1GB of RAM and NFC connectivity. It also indicates an 8-megapixel iSight camera on the back with similar to iPhone 5.

Apple is planning to be held an event in March and most likely, the iPhone 4 inch variant will be introduced. Besides, the supply chain from China also confirmed that the handset will be sold in April 2016.

He started this blog as a hobby to show his affection for gadgets, but over the time this hobby became professional. And now he is working as a full-time blogger, but in free time he loves watching movies and games. PayPal donation for TechToyReviews will be appreciated.
@ankit4554
Previous Leica XU Typ 113 Compact Waterproof Camera with 23mm f1.7 Lens Launched
Next Lenovo Vibe X3 US Price and Specifications