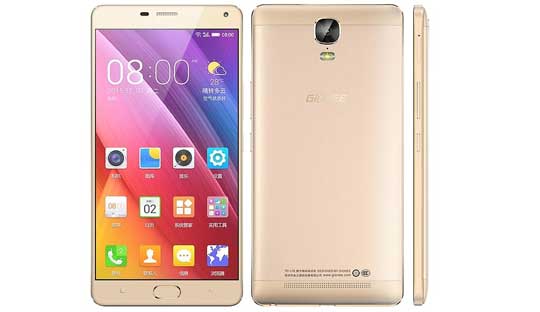 The Gionee Marathon M5 Plus features a massive 6.0-inch AMOLED display with Full HD resolution of 1920 x 1080 pixels that can translate a pixel density of 368ppi. The screen-to-body ratio is only 77.5 percent and with 2.5D arc glass. It is powered by a 64-bit MediaTek MT6753 octa-core processor clocked at 1.3GHz clubbed with Mali-T720 GPU. It packs a 3GB of RAM and 64GB of native storage that’s expandable via microSD card up to 128GB.

The Gionee M5 Plus flaunts a 13-megapixel primary camera with 5P lens, PDAF and LED flash. There is a 5-megapixel front-facing camera with 84-degree ultra-wide angle lens to capture wide selfies. The rear camera can shoot Full HD (1080p) videos. The handset also features a fingerprint scanner on the home button to unlock the device in just 0.1s and fingerprint identification time of 0.38s.

The company touted that the Gionee M5 Plus packing a 5020mAh battery. Gionee optimizes the battery to reduce the drop in its capacity over time, only 1 hour of charging will offer up to 1 day of usage and also supports reversible charging to charge other devices along with double charging chips that allow users to charge it quickly without overheating.

Check out Gionee Marathon M5 Plus price in India below:

Thanks for reading! If my article helped you, I would be happy if you visit Techtoyreviews again and follow it on Social media. This article contains partner "affiliate" links. Clicking on it will take you to the provider and if you make a purchase, Techtoyreviews will receive a small amount of support.
@Techtoynews
Previous Google Home with Google Assistant, answer to rival Amazon Echo
Next LG Stylus 2 Plus with 16MP Camera and 3GB RAM Launched in Taiwan