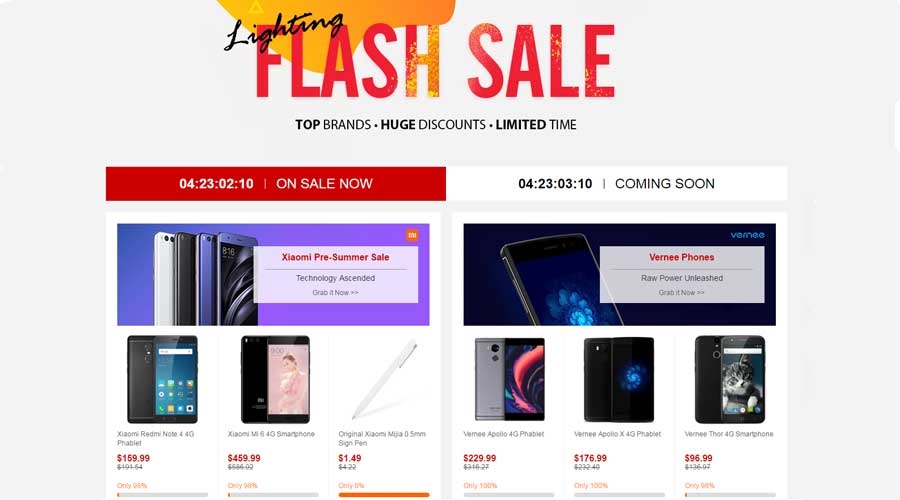 GearBest is offering a wide range of discounts for Xiaomi smartphones across budget, mid-range and premium segments. The most noticeable deal comes to Xiaomi Mi 6 64GB variant, which is now available for $459.99, down from $586. Also being offered is up to a $60 discount on the Xiaomi Redmi 4X smartphone. The Xiaomi Redmi Note 4 32GB variant is available for $159.99 with up to $11 off on the store.

In the budget smartphone category, the Vernee Mars can be bought with a flat $40 off on listed price at the store. That effectively brings down the price of the Mars from $199.99 to $159.99 for the 32GB variant. Meanwhile, the Vernee Apollo X gets a flat $42 discount on the listed price.

The Vernee Apollo 64GB model is currently priced at $229.99 on GearBest and you get up to $48 off in this Lightning Flash Sale deals. Vernee Thor is also being offered at special discounted prices, the 16GB model is available for $96.99, flat $24 off in this flash sale offer. There’s also a flat 20% off on the Vernee Thor E smartphone, which is now available priced at $109.99 for the 16GB model.

Thanks for reading! If my article helped you, I would be happy if you visit Techtoyreviews again and follow it on Social media. This article contains partner "affiliate" links. Clicking on it will take you to the provider and if you make a purchase, Techtoyreviews will receive a small amount of support.
@Techtoynews
Previous Coolpad Cool Play 6 is aimed at Gaming with 6GB RAM and 4060mAh battery
Next AllCall Bro Real Evaluation Show to Public, Performance Effects Exposed