The Japanese company, Konami announced that the new PES 2018 demo will be released on August 30, two weeks before the official release date. 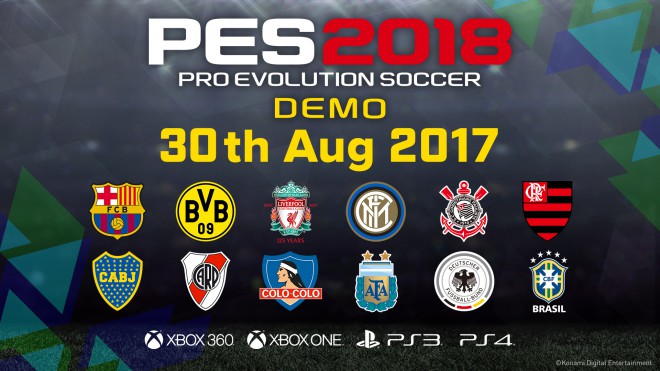 Therefore, PlayStation 4, PlayStation 3, Xbox One and Xbox 360 users will have the opportunity to test out the new demo version of the pro evolution soccer simulation that for some years seems to have found a new vital lymph, thanks to the implementation of the Fox Engine.

Unlike online beta, the PES 2018 demo will only offer some offline features. There will be an exhibition as well as the co-op modes available for PlayStation 4 and Xbox One platforms. Here are the Konami press releases with all the specific details.

“Konami Digital Entertainment B.V. has confirmed its latest demo launch of PES 2018 will be available for download on 30th August, where fans will get a taste of what is to come with new features, modes and an unparalleled gameplay experience, before the game’s September 14th product launch. Those attending this year’s gamescom though will get a chance to sample the PES 2018 demo before it debuts worldwide on PlayStation 4, PlayStation 3, Xbox One and Xbox 360 later this month.”

“The demo will be offline only with players able to take part in both exhibition and co-op modes on the PlayStation®4 and Xbox One platforms. There will be two stadiums to choose from – the iconic Camp Nou and Signal Iduna Park – and players will have an elite selection of teams to choose from including European giants Liverpool, Barcelona, Borussia Dortmund and Inter Milan. South American clubs, such as Corinthians, Flamengo, Boca Juniors, River Plate and Colo-Colo will also available for selection. The demo will also have national teams, Brazil, Argentina and Germany available to play as well.”

“There have been a number of improvements to PES 2018. Its upgraded gameplay gives fans more realistic game speeds and includes strategic dribbling to give the player more control of the ball. KONAMI will also use its cutting edge 3D scanning systems to capture facial and physical data from a number of football clubs, ensuring that players run, pass and move as they do in real life, as well as authentically recreate a variety of iconic stadiums.”

“New this year is also the improved 2v2 and 3v3 feature on co-op mode allowing a player to team up with friends and compete against groups all over the world.”

He is newbie on the Techtoyreviews. An enthusiastic mechanical qualifier who additionally Interested in the latest gadgets and tech. An exceptionally tech savvy who is always discovered reading or writing on technology. In spare time like to peruse books and playing Cricket. PayPal donation for TechToyReviews will be appreciated.
@jigneshdudakiya
Previous YotaPhone 3 With 5.5″ and 5.2″ Dual Displays, SD 625 and 4GB RAM Announced
Next Meizu EP52 Bluetooth Earphones With Qualcomm Audio Chip Announced