Chrome OS could soon reach the standalone tablet, according to what was seen during the last edition of BETT 2018 and shared on Twitter by Alister Payne. The picture in the tweet, which is now removed, leaves little room for doubt: the device is a tablet in a format between 8 and 10 inches, made by Acer running Chrome OS as a reference operating system. 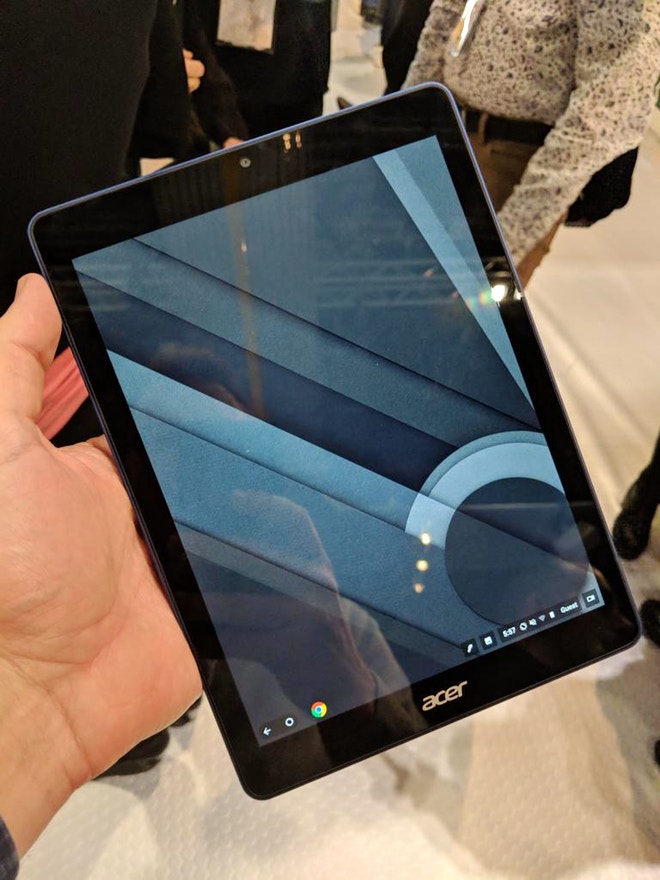 The front panel of the leaked Chrome OS tablet with camera and the Acer brand logo suggests that it does not born as a 2 in 1, but rather with the intention of being used as an independent tablet, because of its portrait orientation. However, it is impossible to exclude the possibility that there is also an accessory that can add a physical keyboard to the tablet, but this is a simple speculation.

However, what is known is the stylus pen support made by Staedtler, not visible in the photo, while the hardware platform could be based on a Rockchip processor. The mysterious Chrome OS tablet was not officially introduced by Acer, which has limited itself to renew its family of Chromebooks and Chromebox, however, its existence is particularly interesting.

Chrome OS, thanks to native support for Android apps, could also reach this category of devices, offering a more optimized operating system for large displays, without having to wait for Google to create a new platform suitable for the tablet segment. Big G seems to have believed in this market segment for a short time, right in the three years of time ranging from the release of Android 3.0 Honeycomb (February 2011) until the last update 3.2.6 (February 2014).

Honeycomb was the only Android version to present a specific and exclusive optimization for tablets, a project already abandoned by Google with Android 4.0 Ice Cream Sandwich, with which the Mountain View company unified the two mobile worlds. From that moment on, the entire Android tablet segment failed to establish itself in the market: Could Chrome OS be the right answer to revitalize what seems to be a sector now in unstoppable decline?

He is newbie on the Techtoyreviews. An enthusiastic mechanical qualifier who additionally Interested in the latest gadgets and tech. An exceptionally tech savvy who is always discovered reading or writing on technology. In spare time like to peruse books and playing Cricket. PayPal donation for TechToyReviews will be appreciated.
@jigneshdudakiya
Previous GEPRC Sparrow MX-3 Racing Quadcopter Drone now on Flash Sale, Save up to 18%
Next Nokia 10 With Dual-lens Zeiss Camera Leaked