After presenting the unusually affordable offering last year with Doogee T6, the Chinese smartphone manufacturer has brought the Doogee T6 Pro right under the spotlight. This is indeed a flagship grade device which much highlighted with Octa-core CPU, 3GB RAM and 6250mAh battery. But the Doogee T6 Pro price is only $149.99 USD and can be pre-ordered via GearBest store. Doogee Smartphones available in Black and White color variant. 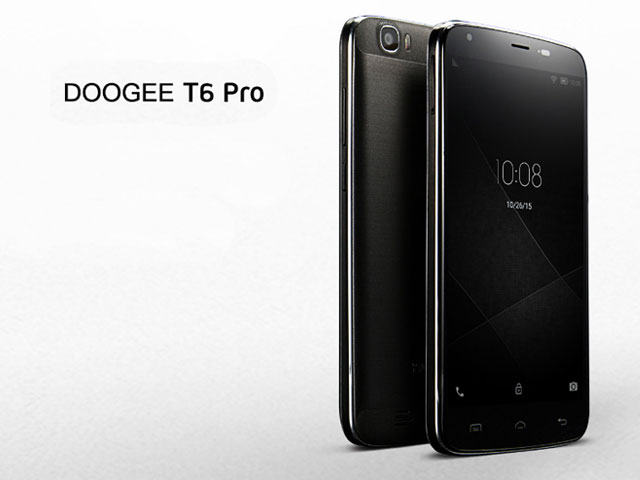 The company has changed a lot of things between the two devices, but the aim remains the same. This device is powered by a MediaTek MT6753 chipset with octa-core 1.5 GHz processor, and comes with 3GB RAM, so T6 Pro will be pro in handling multiple tasks and provides glitch free performance. Along with Mali-T720 GPU, it can easily handle high-end gaming, using multiple apps and other heavy tasks.

The Doogee T6 Pro comes with a 13-megapixel rear camera with Sony IMX214 Sensor, 5P lens and Dual LED flash. It produces the same images that we see on the most of the Sony sensors. There is a 5-megapixel front-facing camera for selfie and video calling. Apart from various camera feature, the camera can record good quality HD videos and stunning still shots.

T6 Pro comes with a 5.5-inch IPS LCD display is characterized by great viewing angles, colors and brightness. Worth what it’s worth, a HD (720 x 128 pixels) resolution lets you enjoy HD movies and games with a quality visual treat. It packs in 32GB of internal storage, which you can also further extend this by using up to 32GB SD card storage.

Doogee T6 Pro price is just $149.99 has a lot to offer in this price range and it will surely impress you with the performance, better features and long battery life. If Octa-core CPU and 3GB RAM handset is in line with your taste, and if you are willing to invest up to $150, T6 Pro won’t disappoint you.

On the other hand, if you are looking for other phones, smart watches, tablets and laptops with huge discounts, offers and coupon codes then you must be sure to visit the GearBest Mobile Deals whereas you will get attractive deals and offers.

He is newbie on the Techtoyreviews. An enthusiastic mechanical qualifier who additionally Interested in the latest gadgets and tech. An exceptionally tech savvy who is always discovered reading or writing on technology. In spare time like to peruse books and playing Cricket. PayPal donation for TechToyReviews will be appreciated.
@jigneshdudakiya
Previous Asus Pegasus 3 with 5.2-inch Display, 3GB RAM and Fingerprint Sensor Launched
Next Wiko U Feel and U Feel Lite with Fingerprint Sensor and Android 6.0 Launched