From the last few years, we had seen a lot of Chinese mobile manufacturer are competing with each other specially with large display, high quality camera and quad-core based handsets. Today we have an exclusive deal on Bluboo Picasso and Bluboo Mini smartphones. 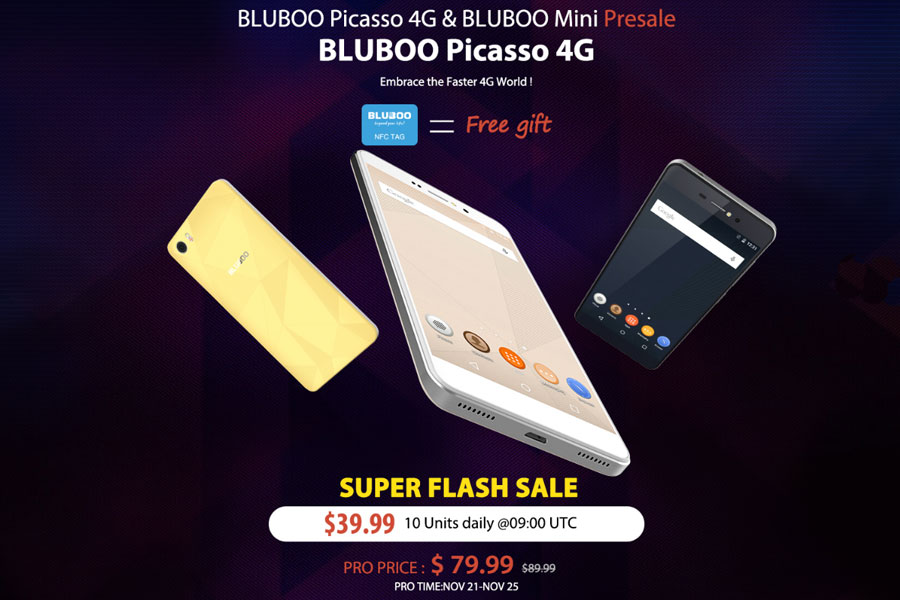 Bluboo Picasso 4G smartphone is here with a huge discount and lowest price ever. If you’re a fan of Chinese brand devices with a large display and a quality camera. So GearBest online e-commerce store holding a Picasso Flash sale in which you will get the device at just $39.99, while the Bluboo Mini price also lowered to $49.99 USD; and of course Free NFC Tag as well.

Both the Flash sale and Pre sale have been already started from November 21 and will last till November 25. The Bluboo Picasso price is also down to $79.99, but in this exclusive offer you will get the Bluboo Phones only in $39.99, but limited 10 units per day.

It features a 5.0-inch On-Cell IPS HD display with 3D printing unibody design, powered by a 1.3GHz quad-core MediaTek MT6580 processor; with Mali-400 MP GPU; 2GB RAM; 16GB of native storage with a microSD card support up to 64GB; it has an 8-megapixel rear and front camera with rear as well as front LED flash. It runs on Android 6.0 Marshmallow OS, 2500mAh battery and supports Dual SIM 4G functionality.

Meanwhile the Bluboo Mini smartphone is already on a peak with exclusive Pre order offer in which the price down to $49.99, save $5 bucks on its launch price of $54.99.

He is newbie on the Techtoyreviews. An enthusiastic mechanical qualifier who additionally Interested in the latest gadgets and tech. An exceptionally tech savvy who is always discovered reading or writing on technology. In spare time like to peruse books and playing Cricket. PayPal donation for TechToyReviews will be appreciated.
@jigneshdudakiya
Previous Gionee M2017 Surfaces in Leaked Live Images and Benchmark Listing
Next HTC Desire 650 with Unique Design and 13MP Camera Announced