Within framework of a global launch event of next@acer at World Trade Center in New York, Acer has introduced new Switch Alpha 12 Liquid-Cooled 2-in-1 Notebook has a similar design to previous generations, but own unique silent LiquidLoop Cooling System, does not need a fan. Switch Alpha 12 will run 6th Generation Intel Core i CPU including all three i3, i5 and i7 U line options, a 12 inches high resolution touch screen display, supports Acer Active Pen, battery life up to 8 hours, and there are several optional docks extend the capabilities of the Switch Alpha 12. 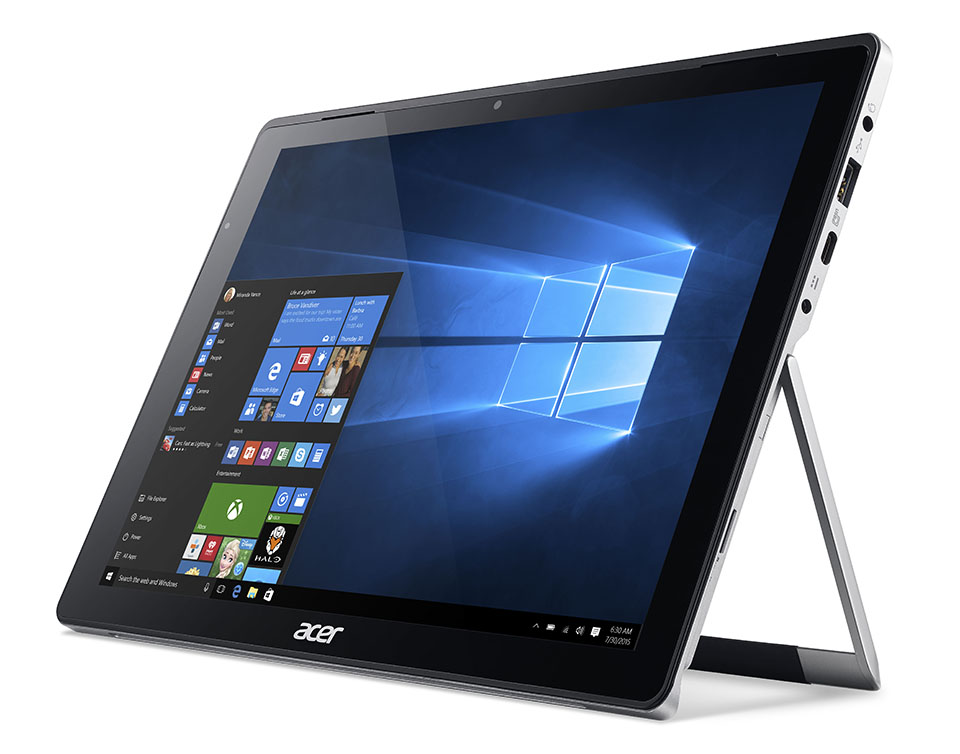 Acer Switch Alpha 12 is an upgraded version of the Switch 12 S and this is a 2 in 1 PC, fanless design, but running 6th generation Core i processor (Acer Switch 12 S also has fanless but running Core M). It has an anodized aluminum chassis with brushed hairline texture makes it more elegant and modern. It comes equipped with a stable U-shaped kickstand has an anti-slip design to hold the display upright, it can be adjusted fluidly to any angle up to 165 degrees, comfortable to use on a desk, airplane, or lap. Also, the kickstand has sturdy hinges that can handle frequent angle adjustments. It measures around 9.5 mm thin (tablet mode) and weighs only 900 grams.

The most prominent feature in the design of Acer Switch Alpha 12 is the Acer LiquidLoop Cooling System. The mechanism works quite similar to the liquid cooling system on the desktop, but without using of fan. This system consists of integrated pump and cold plate unit is a direct replacement for the standard CPU air cooled heat sink. The specialized heat exchanger is mounted behind the rear chassis fan with the tubes connecting the pump and heat exchanger together. The cold plate transfers heat from the CPU into the cooling liquid. The integrated pump assembly pushes warm liquid to the heat exchanger and draws cool liquid back to the cold plate.

Acer Switch Alpha 12 features a 12-inch IPS touchscreen display with 2160 x 1440 resolution pixels (ratio 3:2) equivalent to the Surface Pro 3. The screen supports 10-touch and can be used with Acer Active pen to exploit a Windows Ink feature which will update on next Windows 10 Anniversary updates during this summer. The pen has a high response speed, support palm rejection feature (detection palms) and has 256 levels of pressure sensitivity. With the high quality screen, there is also Acer TrueHarmony high performance sound system that’s equipped with 2 front speakers.

Switch Alpha 12 supplied with is 5.8 mm ultra-thin keyboard with integrated touchpad, connected and secured via magnetic hinge. In addition, it can be adjusted to an ergonomic angles. Acer offers two keyboard options such as standard and backlit models. Along with large trackpad with Touchpad support Windows 10 gestures to provide a smooth and responsive experience.

Thanks for reading! If my article helped you, I would be happy if you visit Techtoyreviews again and follow it on Social media. This article contains partner "affiliate" links. Clicking on it will take you to the provider and if you make a purchase, Techtoyreviews will receive a small amount of support.
@Techtoynews
Previous HP Z1 G3 All-in-one Workstation Desktop with 4K Display, USB-C and 64GB RAM Launched
Next Logitech introduced Logi BASE Charging Stand for iPad Pro with Smart Connector